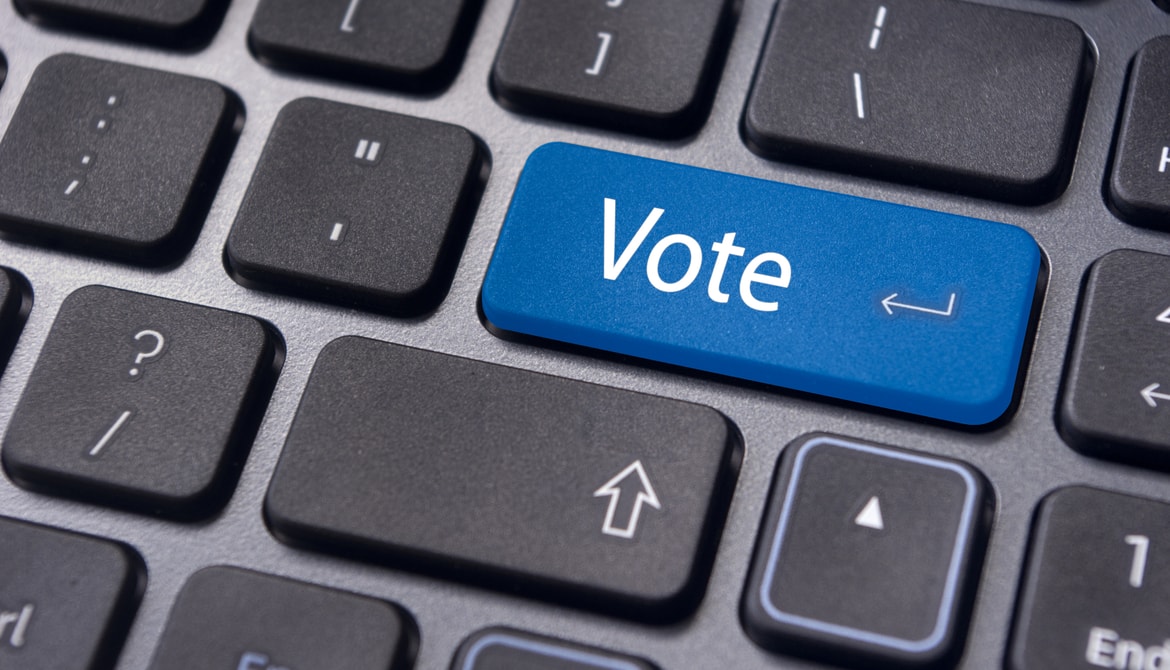 Three credit unions describe how they use electronic balloting to improve their board election processes.

E-voting can help CUs increase participation in elections by improving voting access for geographically remote or time-constrained members. The technological efficiencies also can cut down significantly on staff time while allowing CUs to eliminate the problem of invalid ballots. And evoting can help a CU elect board members who are more representative of an expanding membership.

Since the 2008 introduction of electronic voting at $3.25 billion Veridian Credit Union, member participation in the annual election has increased about six-fold over elections in which only paper ballots were available. However, Brett Engstrom, VP/information technology, says that increased voting was not the primary reason that the Waterloo, Iowa-based CU opted to implement the technology.

“What drove it more for us is that we were expanding geographically, and we wanted our board to reflect the membership we served,” Engstrom says. “When I first started here, almost 20 years ago, we were located in a fairly tight geographic area encompassing 14 counties. At the time, it was reasonable to expect everyone who wanted to vote in our board elections to come to our annual meeting.”

Such expectations changed over the next two decades, as Veridian CU’s field of membership grew to encompass all 99 counties in Iowa and six counties in Nebraska. To accommodate members farthest from headquarters, it initially rented facilities so that its annual meeting could be multicast to all regions served.

“After making that investment, we’d have something like five to seven members show up in Des Moines,” Engstrom says. “It was not a cost-effective solution, and we did not get the voter turnout we were hoping for. That’s when we started looking seriously at whether online voting could help us, and fortunately it has.”

Today, a third of Veridian CU’s 15 board members are from the CU’s newer FOM regions. “Our board of directors is a more accurate representation of our membership, and I would attribute that almost completely to the fact that members are able to vote online,” says Engstrom. “Candidates can campaign and get people in their area to vote without expecting them to travel to Waterloo to cast a paper ballot.”

While increased voter participation among Veridian CU’s 210,000 members was not the driving rationale for electronic voting, the upward trajectory has been encouraging nonetheless. Before using eVote, the CU would typically receive between 200 and 275 paper ballots.

“In 2008, our first year with eVote, we had 713 online votes and 74 paper votes for a total of 787,” Engstrom reports. “So, even in our first year, we saw an immediate shift from paper ballots to e-votes as well as a higher vote total overall.”

In 2017, Veridian CU had its best vote totals yet, with 1,614 electronic votes and 51 paper ballots for a total of 1,665. “We’re seeing more e-votes even among those who come to our in-person annual meeting,” Engstrom says. “Many of them choose to vote online because it’s easier and more convenient. It’s something they can do from the comfort of their homes.”

Veridian CU board member Ginger Shirley, a CUES Director member who chairs the nominating committee, applauds the use of e-voting to increase participation. “The democratic election of a volunteer board is fundamental to the credit union difference, and eVote has made it easier for Veridian members,” she says.

Engstrom says Veridian CU’s promotion of the e-voting option was more prominent this year, which helped drive its record numbers. The CU also helps boost participation through email blasts, conducted through CUES, with reminders sent out to those who had yet to cast their ballots.

“The voter turnout rate is largely based on how much the individual credit union wants to invest in it,” Engstrom says. “If you have e-voting as your main banner message on your website for a month, you’re going to get a lot more participation than if it’s buried somewhere. Your success will depend upon how much you market it and how prominent you make it.”

“It has made the voting process more efficient, given our members more voting options, and increased participation,” says Stephanie Day, chief operating officer for the Washington, D.C.-based CU with worldwide membership of 85,000 members. “It’s become a fairly easy turnkey process for us.”

Since giving its members the e-option in 2007, Bank-Fund Staff FCU has continued to send paper ballots to all of its members. Electronic voting is particularly convenient for the 20 percent of the CU’s members who are outside of the United States; the overseas ballots can be received more efficiently online than via international mail.

Paper ballots are accompanied by a cover letter, which gives members instructions on how to vote electronically. Bank-Fund Staff FCU also notifies members of the electronic voting option via email and on its website.

The CU’s field of membership encompasses those who work within or have retired from the World Bank Group, the International Monetary Fund, the World Bank Children’s Center and the Bretton Woods Recreation Center.

“A lot of credit union elections are pro forma, but ours is not,” says Day. “There’s a lot of member involvement. The positions on our board are highly sought after. In the most recent election, we had 35 candidates for three seats.”

In its most recent election, Bank-Fund Staff FCU averaged approximately 5,100 votes, with more than 45 percent being cast electronically. Prior to implementing electronic voting a decade ago, elections typically garnered a total of 2,500 votes.

Another improvement that the CU has experienced is a dramatic reduction in invalid paper ballots. “Invalid ballots were occurring either because members didn’t put in their correct member number or birthday or because they didn’t sign the ballot,” Day reports. “We worked with CUES on a solution,” with the end result being a unique random ID number on each ballot to identify the member.

As a result, the invalid rate dropped from in excess of 20 percent to 1.45 percent. “There were only 71 invalid ballots in 2017, due to either a missing signature or the member voting for too many people,” Day reports.

Members voting online get an error message if they enter the wrong member number or neglect to enter their birthday. These identity verification requirements are used in lieu of an electronic signature; members also have to click a submit button affirming their choices and get a receipt.

Bank-Fund Staff FCU now has set its sights on reducing the cost of its elections by reducing the number of paper ballots mailed out each year. A significant portion of the $100,000 spent on the election each year goes toward postage. The cost is especially high for overseas ballots, which are sent by international priority mail.

For 2018, the CU anticipates eliminating mailing paper ballots to the 50,000 members who are e-statement subscribers. The rationale is that these members would be more receptive to the elimination of the paper voting option.

Day acknowledges that there are some members who prefer voting by paper ballot. For that reason, Bank-Fund Staff FCU will continue offering members this option—at least for the foreseeable future.

East Coast Credit Union in Dartmouth, Nova Scotia, used eVote for the first time this year and has already received positive feedback from its members.

“We had members tell us it was easy to use, very convenient, and it was nice to have that option,” says CUES member Caroline Dickie, executive assistant to CEO Ken Shea, a CUES member, at the $680 million CU.

Before implementation of electronic voting, the only option for East Coast CU’s 41,000 members was to vote in person at one of its 20 branches, open a variety of hours between 8:30 a.m. and 6 p.m., Monday through Friday, with one branch offering evening hours on Fridays (until 8 p.m.) and two other branches offering Saturday hours from 10 a.m. to 1 p.m.

“It’s a great option for our members to be able to vote at their own convenience and not be restricted to the hours we are open,” Dickie says. “We also have a lot of members whom we never see in a branch because they only do online banking. Many of them have left the province for work or school. That is another appeal of electronic voting—to help those members still feel a connection to their credit union.”

In this transitional year, East Coast CU had slightly fewer votes for its board election than last year. “However, we still had more e-votes than paper ballots,”she says.

To get the word out about the e-voting option this year, the CU posted information in the branches as well as on its website and through social media. “We didn’t send out emails, but we did send messages through the online banking system,” Dickie reports.

Next year, East Coast CU will expand some of those promotional efforts with the goal of encouraging more members to vote. “Some of the things we are considering are buttons, stickers and contests—possibly giving members who vote the opportunity to participate in a drawing,” Dickie says. “We’re also considering creating a business card that our staff can hand to members as a physical reminder for them to e-vote.”

The CU is looking at implementing some new procedures to increase efficiency next year, including expansion of electronic voting to the in-branch environment. “We felt that our in-branch paper voting process was too cumbersome and took up too much staff time,” says Dickie. “Our goal is to eliminate paper voting entirely and have members who come into a branch use an iPad or computer to vote electronically. This will eliminate the need to track votes and ensure there are no duplicates between the paper ballots and electronic voting.”

East Coast CU Chair Mary Oxner, whose board is a member of the Center for Credit Union Board Excellence (cues.org/ccube), sees electronic voting as a way to meet the increased expectations of members in this technology-driven world

“Providing members with access to e-voting allowed for members distributed by geography, accessibility and interests to exercise their right to vote for representatives on their board of directors,” she says. “We were delighted to be the first credit union in our region to offer e-voting to our members.”