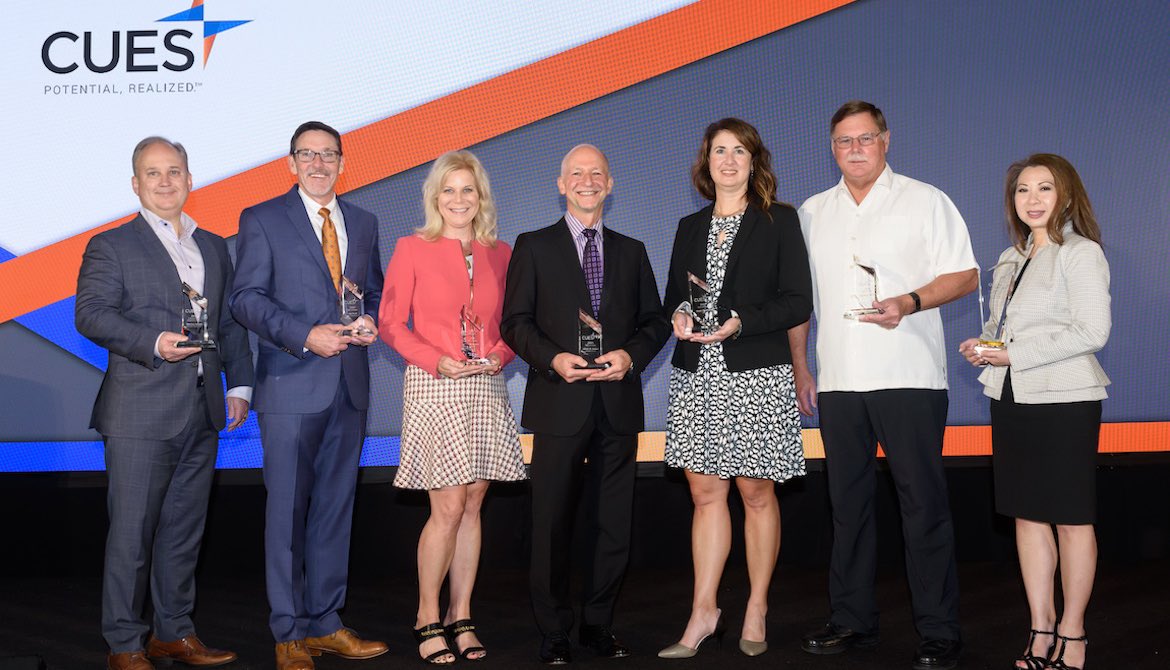 In a ceremony held this week at the annual CEO/Executive Team Network™ in Amelia Island, Florida, CUES celebrated the contributions and achievements of seven credit union executives.

Sterling Nielsen, CPA, president/CEO of Mountain America Credit Union, Sandy, Utah, was named the 2019 Outstanding Chief Executive. This award recognizes credit union CEOs who have rendered exceptional service and made outstanding contributions to strengthen their credit union and the industry.

Since joining Mountain America CU as CEO in 2008, Nielsen led the credit union through the recession and achieved significant growth in the subsequent years. In 2010, he unveiled an ambitious 10-year, $10 billion plan, which the credit union tackled after spending two years rebuilding capital. The strategies set forth by Nielsen allowed the CU to grow at an average of 17.39% from 2016 to 2018. With approximately $9 billion in assets today, the credit union is currently on track to achieve the $10 billion goal in early 2020, two years ahead of schedule.

In addition to the strategic vision needed to lead a successful credit union, Nielsen sees the impact each employee has on the success of the organization. He believes in hiring and retaining the best talent possible and doing everything he can to ensure employees are engaged to take care of the member. He has spent his time as CEO introducing new and enhancing existing programs to make sure employees can develop and grow. The various programs he’s implemented show his commitment to employees and allow Mountain America CU to retain the best talent possible.

Accepting the award, he said: “As credit union employees, we can lift the lives of people. We can help elevate them. We can provide hope where they didn’t already have hope. We can provide direction and guidance along life’s financial journey. We can provide them with that dream home they’ve always wanted or maybe that car so they can go to work. Their education. There are so many ways that we can elevate those around us. Isn’t that what it’s all about? And with that, our own lives are elevated in many ways. So, may we continue to go out there and elevate the lives of others.”

Linh N. Dang, CCE, chief development officer at Addition Financial, Lake Mary, Florida, has been named the 2019 CUES Exceptional Leader. This award recognizes an industry professional who has rendered exceptional service and made outstanding contributions to strengthen their credit union and the movement.

As chief development officer, Dang oversaw the rebrand of Addition Financial from CFE Federal Credit Union in May 2019, along with the credit union’s conversion from a federal to a state charter.

In addition, Dang led the creation of a new leadership program for credit union employees. This program enables managers to better coach their staff and produce future leaders. She also oversaw the creation of WeConnect, a weekly training podcast designed to foster professional development within the organization.

Dang is an influential role model and leader at Addition Financial and has played an important part in shaping the credit union’s future for the better by fostering professional development opportunities, creating meaningful products and services for members, and looking for new ways to impact the community. Under her leadership, Addition Financial launched its student-run high school branch program in 2008, which provides real-world experience for high school students and has since expanded to nine schools.

“Working in a credit union for me … it’s not just a profession,” said Dang upon accepting the award. “What we do is impactful. Everything that we do makes a difference in the communities in which we serve. To my fantastic team, … they are the ones that made it happen. I have a lot of respect for them, and when there is mutual respect, amazing things always happen.”

Next, five credit union executives were inducted into the CUES Hall of Fame. The CUES Hall of Fame recognizes a lifetime of achievement and dedication to the credit union movement. These extraordinary leaders were chosen by CUES board of directors for their contributions to their profession and the industry, involvement in community service, and education and history of self-improvement.

Joe Hearn, CCE, president/CEO, Dupaco Community CU, Dubuque, Iowa, accepted his award and said: “I’ve got so many friends and mentors in this room today. Thank you for what you’re doing. Thank you for the value you’ve brought to Dupaco and thanks to CUES for being such an important and integral part of my growth and development. CUES is an impact player, and I continue to pay it forward by sending my folks to CUES events and activities, and I encourage you as leaders to do the same.”

Kim Sponem, president/CEO, Summit Credit Union, Madison, Wisconsin, got her start in the industry by working at CUES in the marketing department right out of college. “I remember being so influenced by the tremendous leaders of the credit union movement back then and all of their accomplishments,” she said. “CUES gave me a unique opportunity to interface with credit union executives early on in my career. I thought ‘They are so approachable and friendly and helpful. It’s really clear that credit unions are fundamentally different from so many other types of organizations.’ I stayed connected with CUES through my entire career. I really feel that CUES played an integral part in helping me get to the CEO position 18 years ago and has continued to challenge my thinking with the thought leadership they provide.”

Gregory Smith, retired president of PSECU, Harrisburg, Pennsylvania, thanked several of his former executive team, crediting them with much of the credit union’s success over the years, saying “It’s not possible to accept this award without first recognizing some of the people that helped me achieve these things. It takes a team of people providing support and those people I’d like to recognize now.”

Finally, Albert Suraci, CCE, retired president/CEO of Northern CU Ltd., Sault Ste Marie, Ontario, was honored. “This truly is an honor and a privilege. I am very, very grateful,” he said. “It’s an honor being on this stage in front of you today. I’ve had a career that I’ve loved. It’s always been important to me that our members are first and foremost. … We’re the economic backbone of many of the [30 communities across northern and rural Ontario] that Northern Credit Union serves. We really can and truly do make a difference.”

Theresa Witham is the managing editor/publisher at CUES.