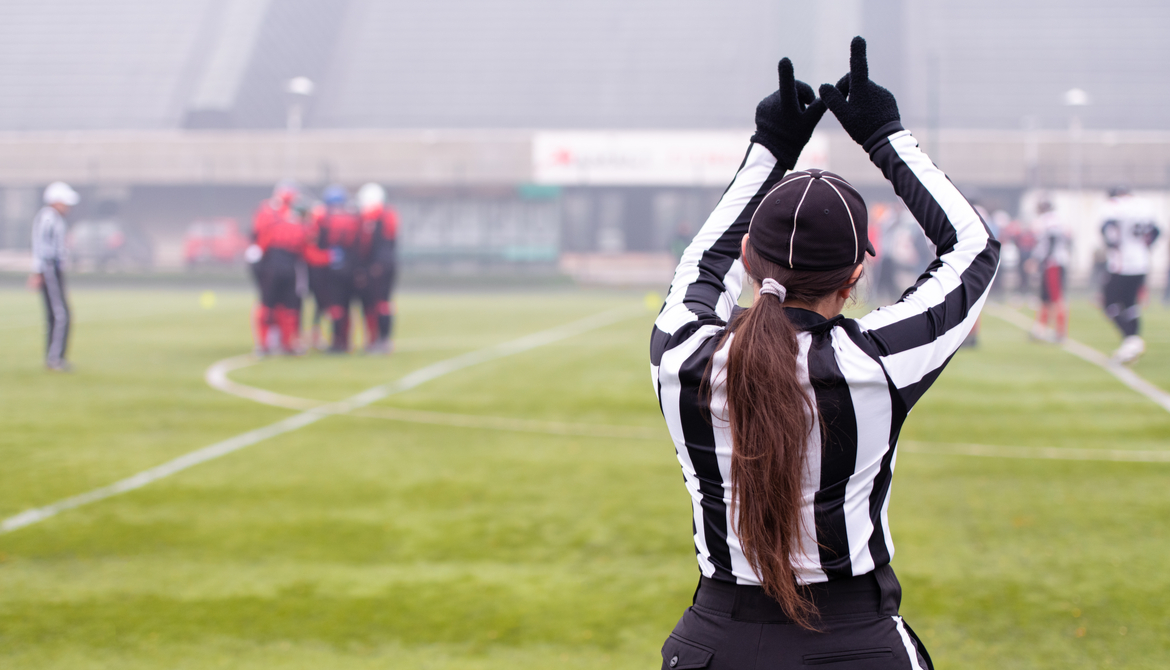 It’s Super Bowl Sunday as I write this, and it’s snowing at my home in New Hampshire. My husband has made a big batch of his famous mac and cheese, and we have a fire roaring in our wood stove in the ell. (Unless you’re from New England, you won’t know what an ell is, but it’s a great term that means the room that connects the house to your barn. For us, that room has been refinished to a cozy family room.)

We’re getting ready to watch Tom Brady (yes, I’m still rooting for him) take on Patrick Mahomes. But the news that I’ve been focused on this week is about the three women who “will be making history” tonight—National Football League referee Sarah Thomas and Tampa Bay Buccaneer assistant coaches Maral Javadifar and Lori Locus. While Tom Brady will be playing in a record 10th Super Bowl, for the first time in NFL history, three women will also be on the field tonight.

While the female football ref and coaches made news all week, I also saw an interview with Jocelyne Lamoureux-Davidson and Monique Lamoureux-Morando, two sisters who happen to be Olympic gold medalists in hockey. Aside from continuing to play the sport that they love, they’ve also dedicated their lives to inspiring the next generation of young girls to fight for equality in sports. Asked about tonight’s history-making Super Bowl, one of them said, and I’m paraphrasing here, “We’ll know we’ve made progress when this is no longer a story.” I couldn’t agree more.

I mean, don’t get me wrong. I think it’s great that history will be made tonight. Just as I thought it was great that Joe Biden picked Kamala Harris to be his running mate, and she is now our vice president, regardless of the politics. But why does it still have to be history-making? Because it is.

I had the same reaction when I was speaking recently with CUES member Deborah Acosta Conder, board chair at JSC Federal Credit Union, Houston, Texas. Conder was bringing me up-to-speed on some recent appointments that the credit union had made to its board of directors. She shared that under her fresh leadership, and the constructive partnership that she was building with relatively new CEO Brandon Michaels, also a CUES member, she had communicated to the board that the credit union needed a “more diverse board—an expanded board, because the credit union was expanding its own strategic vision.”

With an acute focus on diversity, Conder noted that being “a person of color herself,” she had always wanted “the membership to see themselves reflected on the board.” And now, she was in a position to make a difference.

Acting with purpose, Conder and her colleagues first identified the core competencies, skills and qualities they wanted in their new board members. Although the legacy of the credit union was proudly and firmly tied to the National Aeronautics and Space Administration, the team decided to recruit some board members outside of the famous space agency. The group prioritized diversity, individuals with broader experience who had been through mergers and acquisitions, and people with legal and digital strategy experience. And they hit the jackpot.

They also changed where and how they recruited board members. Conder called on each of her board colleagues (and we would encourage the inclusion of the CEO in this process too) to explore their own, personal networks. If great, potential candidates for your board are not already members of your credit unions, assuming you have a fairly open charter, they can join! The recruiting team also worked with the local United Way’s Project Blueprint that “trains tomorrow’s nonprofit board leadership, ensuring that Greater Houston’s nonprofit sector reflects the rich diversity of [its] community.”

The results? Three new additions to the board who all bring with them not only great diversity but also great competence. One is even a coveted millennial!

Michaels agrees with Conder that the credit union will be better for it. A third-generation CEO, following in the footsteps of both his grandmother and his mother, he says that throughout his life, he relied on the perspectives of these two pioneering women: “When I look at boards, I value diversity of thought and experience. We all have various perspectives based on our lives and our journeys, and it is that very diversity of thought that is incredibly important to us in our boardroom because our members are diverse.”

New board member Lavonne Burke Hopkins, senior legal director, cybersecurity, product & application security, and Dell Digital for Dell Technologies Inc., joined the JSC FCU board because she believes that there is alignment between her “day job” and the current strategic initiatives being undertaken by the credit union. She was happy to find that board service at the credit union is a perfect way to “marry her experience with her own personal goals of service.”

Her new board colleague Dwayne D. Busby serves as the executive director overseeing the mission, goals and overall purpose of strategic partnerships at the University of Houston-Clear Lake. Conder tapped Busby, of course, for his strategic thinking skills, and he is more than happy to provide them. He was honored to be approached by the chair, who is a leader in the community, and he, too, sees board service as a way of giving back to his community, which has done so much for him. His goal? To help determine how the credit union’s strategic plan actually works in Houston’s very diverse community.

Lastly, Portia S. Keyes was tapped during this last round of elections too, and the board is lucky to have her. Keyes is a contracting officer at NASA Johnson Space Center. A strong “believer in the power of teamwork,” Keyes joined the board because she, too, believes that “serving the credit union is an extended way of serving her community.” She also volunteers for Fifth Ward GO Neighborhood, a Houston-based initiative dedicated to revitalizing the city’s communities.

In The State of Credit Union Governance 2020, published by Quantum Governance in partnership with CUES and the David and Sharon Center Johnston Centre for Corporate Governance Innovation, we found that demographic diversity was ranked No. 1 among the highest priorities when recruiting new board members among our respondents, but only sixth among those skills that add value in the boardroom.

Could it be that everyone is talking about the need for greater diversity in the boardroom, but no one understands why they need it? At JSC FCU, clearly, leaders are both valuing diversity and prioritizing. They, along with all of us at Quantum Governance, would encourage your credit union to do both, too.

Jennie Boden serves as president of consulting services for CUES Supplier member and strategic provider Quantum Governance, Herndon, Virginia. Boden has 30 years of experience in the national nonprofit sector and served as the chief staff officer for two nonprofits before coming to Quantum Governance. Quantum Governance provides credit unions, corporations, nonprofits, associations and governmental entities with strategic, cost-effective governance, ethics and management consulting, facilitation, and evaluation. With more than 50% of Quantum Governance’s clients representing credit unions, the organization fields more engagements in the credit union community than in any other. The firm is a unique L3C organization that integrates the best elements of both the for- and non-profit communities into one practice. It is a low-profit, limited-liability service organization dedicated to the public good and one of the very first such legal hybrid organizations in the United States.