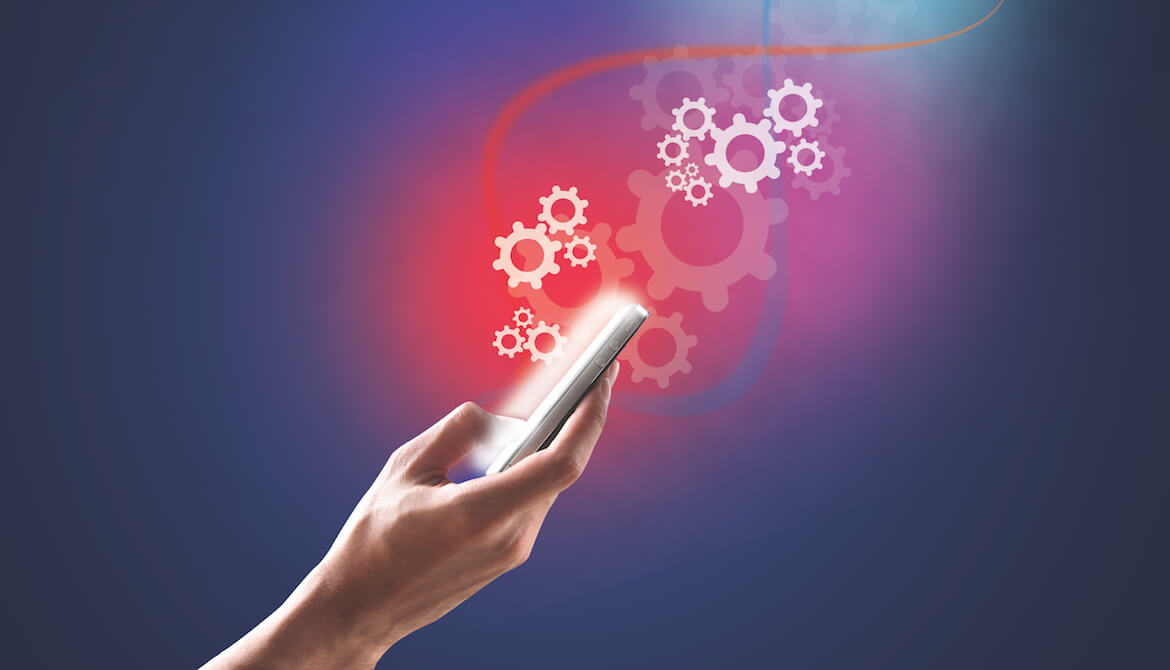 How CUs are using handheld technology to deepen the member experience.

Nowadays, many financial institutions have a mobile banking presence, whether it be a dedicated app or a website that automatically reformats itself for handheld device—or both.

Text-messaged account balances and alerts are now on a delivery spectrum that also includes full, on-the-go access to account summaries, transfers, bill-pay, mobile deposit, credit card rewards programs, account opening, loan applications, and so on. These are the services big institutions offer, and consumers have come to expect them. So today, even the tiniest institutions can find themselves striving to hit this mark.

Some CUs Have Been at it for Quite a While

“Xceed Mobile truly is realizing the promise of an Xceed Financial Center in the palm of your hand, which has been the ultimate goal and vision since our first-generation mobile app was launched back in 2009,” says CUES member Marquis Boochee, VP/strategy and innovation at $1.2 billion Xceed Financial Credit Union, El Segundo, Calif., with 65,000 members and 300 employees. “We’re all-inclusive in terms of the various devices and platforms our members might use, with apps for Apple and Android. Plus, our website is mobile-optimized, so it adjusts automatically to any device a member might use.”

“Certainly our size, the scope of our membership, and our product offerings give us the resources—and the call to action from our members—to offer a deeper and more extensive range of services,” says Chris Schell, SVP/marketing. “But I think in today’s market, it’s pretty hard not to be playing in the mobile space no matter what size you are.”

Schell cites studies that say 90 percent of financial decisions are made by women, who tend to be very busy and therefore highly likely to transact business on their phones. Meanwhile, young consumers do just about everything on their phones by default. For these reasons, a strong mobile banking presence is central to any CU’s long-term growth strategy. And Schell suspects “the usual” in the mobile space may no longer be enough.

What does that mean? The answer, Schell says, is a “win-win-win” for the credit union, its members, and local businesses (many of whom are also members).

Larky was a perfect fit for Summit CU because the credit union already had a loyalty rewards program that was successful, but faced limitations.

“We have a member rewards program called Oodles,” Schell explains. “Almost a third of our members are part of it. To qualify, you have to have a checking account with a debit card and e-statements, plus a loan and a money market account, a certificate of deposit, or an Individual Retirement Account. It’s a way for us to give some additional benefit to members who have deepened their relationship with us.”

Oodles offers such bargains as buy-one-get-one-free deals, primarily at business members’ establishments, to qualified members. But Schell says the challenge has been the credit union’s geographic footprint. It has been difficult to offer deals that are local for members in rural Wisconsin as well as big cities such as Madison and Milwaukee.

On top of that, the delivery method has been low-tech: a monthly e-mail pushed out to Oodles members. Larky, which the CU officially launched in February and is separate software from the Access Softek technology the CU uses to deliver mobile, has the potential to solve both problems.

“Given Larky’s ability to target and negotiate offers across our footprint, not only with our business members but other businesses as well, the app was very attractive,” Schell says. “And we also loved the fact that we could deliver those offers in a mobile setting to alert members when they’re near an Oodles-participating business. It’s more accessible in two dimensions: more accessible because it’s mobile, and more accessible because we’re going to have a factor of double or triple the number of offers that we were able to negotiate.”

Will Oodles members want to access their benefits online? The likelihood is high. The CU has about 45,000 members who use mobile banking and about 40,000 Oodles members, and Schell says the Venn diagram is nearly a circle; both groups include the CU’s most-active members.

It’s early days for this CU’s use of the app, but Schell says the return on investment looks appealing because his department won’t have to spend time recruiting businesses to participate in the Oodles program or sending out emails. He says he has calculated the amount of staff time Larky will save, and it is approximately a break-even—not even taking into account the member-loyalty benefits it is likely to reap.

As the workplace CU for such technology innovators as Xerox, Xceed Financial CU has a diverse and tech-savvy membership. Its members expect the CU to be an innovator, including with mobile banking.

“We take pride in being very progressive and innovative, always pushing ourselves to try new ideas and introduce new technologies and innovations to our members and associates,” says Boochee. “We definitely consider ourselves early adopters. But we don’t embrace technology for its own sake, but as a means to make banking with us easier and more convenient for members.”

In addition to apps for Apple and Android, the CU has a separate mobile banking website for members optimized to work well on any device. It offers account access via Touch ID (Apple’s fingerprint identity sensor) and Apple Watch applications.

What really differentiates Xceed, however, is that the mobile app offers access to the Xceed Xperience Center, the CU’s face-to-face video banking system. With the Xperience Center, members can engage via video chat with an Xceed Financial CU associate to perform virtually any non-cash transaction – just as though they were in an actual branch.

The video banking solution—created in partnership with both Digital Insight, Redwood City, Calif., and VSee, Sunnyvale, Calif.—rolled out in 2015, starting with beta-testing in which members used the system on iPads and desktop computers in the branches, with in-person service representatives ready to help.

Boochee says the biggest lesson the CU learned during the testing period was that members wanted access to video banking on their mobile devices. The institution pushed hard to release that the same year.

Now, from 7 a.m. to 4 p.m. Pacific time, members can speak with Xperience Center associates via their mobile devices in English or Spanish. They can transact all kinds of business, including applying for a loan, opening a new account, moving money, or even meeting with financial consultants in the CU’s wealth management group.

“Very few credit unions or any other financial institutions are offering this type of service right now, but we think it’s the future of the financial services industry,” Boochee says. “It merges the convenience of mobile with the personal touch of traditional banking, and our members love it.”

Why This? Why Now?

There are a number of reasons these types of mobile banking solutions resonate with members. One is the spread-out nature of many CUs’ membership bases.

“We’re a nationwide credit union, and we couldn’t possibly have [brick-and-mortar branches] everywhere we have members,” Boochee says. “So we’ve made it a priority to ensure that our digital platforms deliver outstanding experiences for our members. That’s been a good move, because more and more of our members are using this as their primary channel to interact with us.”

The same philosophy comes into play with Evangelical Lutheran Church in America Federal Credit Union, a startup institution that received its charter in July 2015. The CU, which plans to open this spring and isn’t ready to present an asset size, is designed to serve the 3.8 million members of the Evangelical Lutheran Church in America, whose nearly 10,000 congregations are spread all over the United States and across the Caribbean. The CU will also serve employees of ELCA Ministries and its 65 synod offices.

“We’re a common-bond credit union, and that is the main reason you won’t see the branch strategy, at least at the outset,” says VP/Chief Operations Officer Luis Reyes, a CUES member.

“The credit union itself will be headquartered at the church’s main operation center here in Chicago, and that office will serve primarily the folks in this building. However, we still have a very wide net that we have cast coast to coast, and we realize that we have to utilize technology just to give our member base the touch points that they have come to expect in the banking world. We know that mobile is a large piece of that solution.”

Reyes says the new CU’s mobile solution will offer remote deposit capture, a surcharge-free ATM locator, full access to the CU’s online banking platform, and funds transfer. Through its core processor, CU*Answers, Grand Rapids, Mich., the CU will offer person-to-person transfer that allows members to move funds from their accounts into anyone else’s, no matter what financial institution they use. This will make splitting lunch with friends so much easier.

Reyes also envisions a day when the app will generate transaction codes for members, who will then be able to walk up to a smart ATM, scan the code, and complete their transaction. He also has visions of members being able to use the near-field communicators in their phones and in ATMs to authenticate themselves. There will be no need to pull their ATM card out; they’ll just tap the phone on the ATM and type in their PIN.

These forward-looking mobile apps are being designed with geographically scattered members in mind. But considering how ubiquitous mobile technology has become, the benefits may be broader.

“We expected members in far-flung areas to gravitate toward the Xperience Center [video banking via mobile], and that’s happened,” says Boochee. “But it’s been interesting to see that even some who could easily drive to an Xceed Financial Center appreciate the convenience and personal touch.”