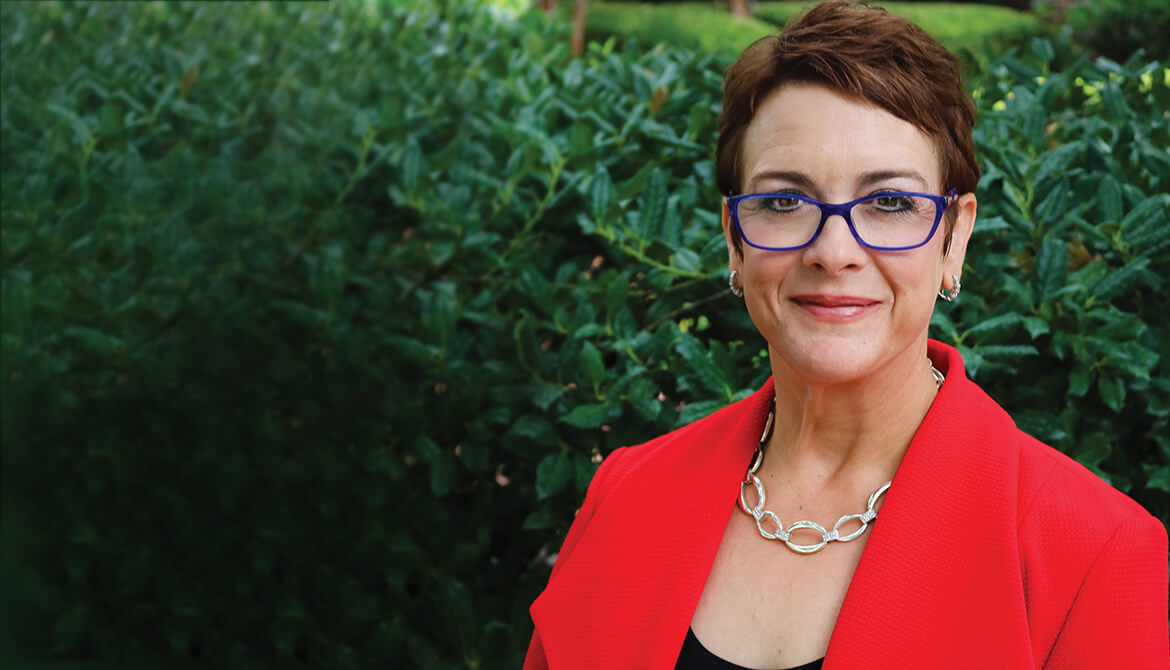 The exceptional journey of Amy Downs is a story of perseverance and achievement in the face of unimaginable loss and tragedy.

A CUES member, Downs, CCE, is the SVP/COO of $263 million Allegiance Credit Union in Oklahoma City and was recently named the 2017 CUES Exceptional Leader. In 1988, Downs began working as a teller for Federal Employees Credit Union, now called Allegiance CU (allegiancecu.org). At the time, she never dreamt she would become CEO less than 30 years later. But that is what she will do when she succeeds current CEO Lynette Leonard on Jan. 1.

As incoming CEO, Downs has an important legacy to protect—the memory of 18 co-workers who lost their lives in the Oklahoma City bombing of the Alfred P. Murrah Federal Building on April 19, 1995. Downs was in the building that day when a powerful explosion ripped it apart.

“I fell three floors and was buried under about 10 feet of rubble,” Downs recalls. She waited more than six hours to be rescued. Among other survivors was then-CEO Florence Rogers, who led the remaining 15 employees in the Herculean task of rebuilding the CU after losing more than half of its staff and its only location.

In the aftermath of the bombing, Downs made significant changes in her life—both professionally and personally. “After a few years of getting through the dark tragedy of it all, I keep coming back to that moment of waiting to be rescued and promising God that, if I got out of this alive, I would never live my life the same way,” she says.

A Promise to Change

In fulfilling that promise, Downs has dedicated herself to excellence in her career. She’s come a long way from the teenage girl in Shreveport, La., who was not the best of students. “I barely graduated high school and then flunked out of college,” she reports. “I was one of those young adults who was failing to launch.”

Downs took her first job in the credit union industry as a drive-through teller at Wesla Credit Union in Shreveport, La. Moving to Oklahoma City a few years later, she decided to remain in the credit union sector by taking a teller job at Federal Employees CU.

Within a few years, she was promoted to credit card clerk. At this point her boss, Visa Program Manager Vicky Texter, became the first of two important mentors in her life.

“Vicky was the first person who made me feel that this could be a career,” Downs says. “She was an amazing woman who taught me that, no matter what your job, you should always do it with excellence.”

Whenever Downs was feeling uncertain about her abilities, Texter was there to offer support. A few days before the bombing, Texter left an inspirational card on Downs’ desk. The card read: “Use what talents you possess; the woods would be very silent if no birds sang there except those that sang the best.” Texter wrote a personal note in the card, encouraging Downs to be the best she could be.

Tragically, Texter lost her life in the bombing. To this day, Downs cherishes that card and the message it represents. “I will be forever grateful to Vicky,” Downs says. “She had a huge impact on my life.”

The other important mentor in Downs’ life is Lynette Leonard, a CUES member who became CEO upon Florence Rogers’ retirement 21 years ago. Under Leonard’s leadership, Allegiance CU has more than tripled its asset size, grown to four locations and increased its staff to 76 employees. Leonard also led the CU through a name change and a transition to a community charter.

“Lynette came in and made a lot of difficult decisions,” Downs says. “She did all the things needed for the credit union to survive.”

Leonard took Downs under her wing, recognizing her potential as a future leader for Allegiance. “I can truly say that Lynette believed in me more than I believed in myself,” Downs says. “She is the one who inspired me and prepared me to step into her role.”

When Leonard became CEO, she did not have a college degree. However, she was perceptive enough to realize that Downs would need one. “Amy and I had several conversations about her future,” Leonard recalls. “One of the things I told her was that the credit union had grown too large to ever have another CEO without a degree.”

“Lynette challenged me to go back to school, and I turned the challenge around on her and said, ‘Why don’t you go with me?’” Downs reports. “So, we both went back and got our degrees together. And this time, I did not flunk out.”

“By earning these degrees, I felt I had righted a previous wrong in my life,” Downs says.

Downs further readied herself for leadership by attending all three years of CUES’ CEO Institute and earning her Certified Chief Executive designation. She moved up, attaining the SVP/SOO role. She also earned several honors, including being a 2016 CUNA Rock Star and a local newspaper’s 2015 Woman of the Year honoree. With these credentials, Leonard is confident that Downs is well-prepared for her new role.

“I’m excited to see what Amy will do as CEO,” says Leonard. “She’s an exceptional person who inspires others and is willing to take on any challenge. I’m sure she’ll do a wonderful job.”

Beyond her academic and professional achievements, Downs has changed her life through a focus on physical fitness. For many years, she struggled with a weight problem, but through a commitment to a healthier lifestyle, she has lost more than 200 pounds.

Over the years, Downs took up biking, running and swimming. One of her goals was to participate in the Oklahoma City Memorial Marathon Run, which honors the 168 people who died in the bombing.

“As a survivor, I was passing out medals at the marathon and became inspired by the different types of people crossing the finish line—older people, people who were overweight, people with disabilities,” Downs recalls. “I decided to run in honor of my co-workers who were killed. I began training with several of my Allegiance co-workers, and we all ran a half-marathon together.”

After that experience, Downs began participating in marathons, triathlons and Aquabike competitions. She is currently training for her first full Ironman triathlon, taking place in November in Tempe, Ariz.

Downs’ devotion to physical fitness led to personal happiness when she met fellow cyclist Terry Head. She married him four years ago. In addition, Downs takes pride in her 17-year-old son, Austin Petty, who is pursuing his passion as a drummer.

When Downs becomes Allegiance CU’s CEO in January, she will be the third consecutive woman in that role. “I love that we have this wonderful history at the credit union,” she says. “I was able to get a picture of Florence, Lynette and me not that long ago, and that is something I will cherish.”

In executing her CEO duties, Downs will be deploying the lessons she learned from the two important mentors in her life. “If there was one message that Lynette has constantly pushed, it is ‘Don’t be complacent. Push yourself to do more,’” Downs reports. “Vicky was the same way. She was always telling me, “If you are going to do something, do it well. Do it with excellence. Give it your all.’ That is what I intend to do.”