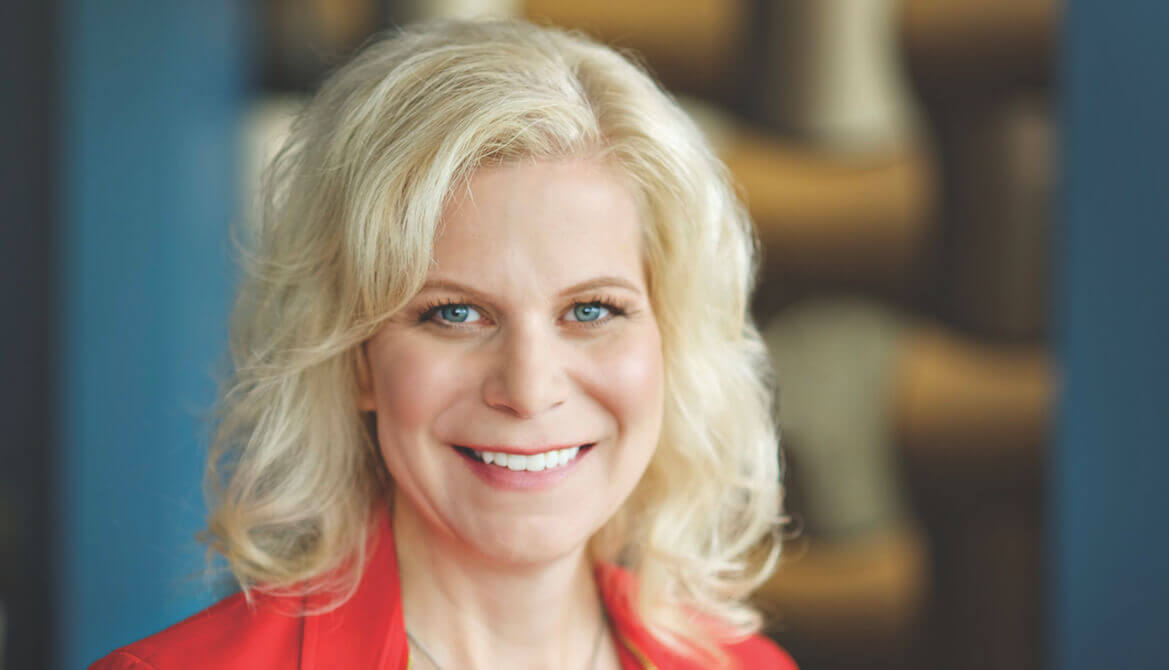 More than two-and-a-half decades ago, Kim Sponem learned about the value of credit unions when she became a CUES employee. Today a member of the CUES Board of Directors, she once again finds herself in a position to further the organization’s important mission of advancing leadership potential at credit unions.

“My first job out of college was at CUES as programs and services assistant,” reports the CUES member, now CEO of $2.9 billion Summit Credit Union, based in Madison, Wis., and serving 171,000 members nationwide. “Having started my career at CUES, I’m a big believer in CUES’ mission and what the organization does to help prepare people for executive positions, whether as a CEO or elsewhere in the C-suite.”

Sponem says she’s a lifelong learner. “I appreciate the importance of professional development, and I’m happy to give back to the organization by being on the CUES board,” she says.

A native of Madison, Sponem never ventured far from home as she embarked on greater and greater challenges in her career. She attended the University of Wisconsin, where she earned her bachelor’s degree in consumer science—something that proved relevant to product development and marketing at CUES.

Sponem had an immediate impact at the CU, spearheading the formation of a training department and then the HR department. She also took on responsibility for operations. “This was all within a four-year period,” she reports. “My title kept changing, and then I was asked to take on the role of executive vice president.”

After two years as EVP, Sponem became interim CEO. The CU undertook a formal national search for a permanent replacement, and Sponem was one of the top candidates. “I had my final interview in January 2002, when I was almost nine months pregnant,” Sponem recalls. “They offered me the position that evening, and my son was born on Feb. 4.”

A Pathway to Growth

In her 15 years as CEO, Sponem has led Summit CU to a nearly 15-fold increase in assets—from $200 million to nearly $3 billion. She cites several reasons for that phenomenal growth.

“For one thing, we became very focused with our target and our value proposition,” she says. “We focus strongly on the needs of women and on a value proposition that emphasizes building strong, thriving communities through financial education.”

Men are not shortchanged by this focus on women, Sponem stresses. “One of the things we have found is that when we focus on what is important to women in financial services, we also meet or exceed the needs of men. Women tend to look at money differently than men. Studies show they are often less confident that they have the answers, not because they know less, but because they are open to the idea that there’s more to learn and know. They look to us for guidance and for reassurance they are on the right track.”

“This is our own copyrighted program primarily designed for women, but men can participate as well,” Sponem says. “For women, the goal is to help them step into their first million, no matter where they’re starting from. Women tend to end up in poverty in retirement at a much higher rate than men do. We want them to reach retirement with as much money as possible. This program helps by focusing on what is the next step to achieving this.”

Summit CU’s dramatic growth also is attributable to a series of mergers. The most significant one was in 2008, at which point the CU cracked the $1 billion mark and became the largest CU in Wisconsin. The mergers enabled the CU to expand its physical presence in the state.

“We had four locations when I started as CEO,” Sponem reports. “We now have 34 locations across south, central and eastern Wisconsin, including three ... in Madison high schools.” The emphasis on high schools is consistent with the CU’s goal to provide financial education at an early age.

“We believe it is easier to prevent financial challenges than it is to fix them,” Sponem says. “That’s why we have outreach programs for middle school, high school and college students. We want to do whatever we can to help people get on track in the first place. We integrate into the classroom with guest speakers and financial education programs.”

One of these programs is Project Teen Money, a competition in which high school students compete for scholarship money by creating videos that emphasize good money saving, spending and giving habits.

“Each contestant creates three videos that are voted upon by peers and judges to determine the winners,” Sponem says. “They do the research and get very creative in putting together the videos. It’s a very cool way for teens to teach other teens about money.”

Project Teen Money is a youth version of another called Project Money, an annual competition that features four contestants vying for monetary prizes by improving their finances. The competition takes place over seven months, during which contestants try to outdo one another by reducing loan debt, increasing savings and teaching others what they have learned. The winner receives $10,000, and the runners-up each receive $2,500.

“We pair each of the contestants up with a coach from Summit,” Sponem says. “Our contestants have thousands and thousands of followers, and a big part of the competition is going on TV and blogging about their experience so they can share what they’ve learned with others.”

These innovative programs are indicative of Sponem’s leadership, which inspires Summit CU’s 525 employees to think creatively in support of its members. “Kim takes an inspirational approach to leadership,” affirms CUES member Linda Voit, AVP/internal communications. “She’s always thinking ahead—three, five, sometimes 10 years out about what we could be doing for our members and our employees and our communities.”

During her six years at Summit, Voit has observed Sponem’s commitment to solving issues rather than being married to a specific solution.

“Kim is one of the best leaders I have ever had the privilege to work with,” says Litscher, who together with the other Summit CU directors is a member of the Center for Credit Union Board Excellence. “For more than eight years, I have had the honor of seeing her tireless dedication and attention to detail while setting strategy, which has propelled Summit into one of the top credit unions in the country. She is a visionary in the credit union industry, and her determination has earned her the respect of all who know her.”

Under Sponem’s leadership, Summit CU has made a commitment to show the value of cooperatives to the community. An important component of this is the CU’s Co-op Connection, an annual event that highlights cooperative businesses with a street fair near Madison’s Capitol Square.

“We’ve been doing this for seven years,” Sponem says. “At our most recent event, we had about 4,500 people learning about the cooperative business model and what being part of a cooperative means.”

As another way to emphasize cooperatives, Summit CU has turned its annual meeting into a major member event.

“We have the annual meeting as well as a picnic celebration with different games and an obstacle course for the kids,” Sponem explains. “Prior to this event, it was difficult to get even 200 people to our annual meeting. Then we made the decision to tie the meeting into our strategic plan of reinforcing that members are part of something bigger. Now we draw close to 2,500 people.”

To further show the value of cooperatives, the CU calls its annual dividend “Cash Boomerang”. “It’s something we’ve been doing for the past three years,” Sponem explains. “When the cooperative is doing well, then members are issued this patronage dividend. It’s another way of showing the cooperative difference.”

As the new CUES Chair, Sponem is looking to having continued impact on the programming that CUES brings to its members.

“I think that the programming has continued to evolve and is as strong as ever,” she says. “I’m really excited about the focus we’re putting on better meeting Canadian executives’ needs and helping them be a bigger part of CUES. I also think it’s important that we continually push the envelope on programming and thought leadership and continue to work on preparing executives for what’s around the corner.”

Sponem acknowledges the great leadership of CUES President/CEO John Pembroke keeping the organization on track. “John was hired during the time I’ve been on the board, and I think he’s doing a fantastic job of ensuring that CUES stays ahead of executives’ needs by creating programming that is engaging and thought-provoking,” she says.

Couple this with Sponem’s leadership, and CUES will be in good hands. Litscher sees her skills translating well to CUES.

“Kim has always shown a willingness to listen to staff and provide motivation to work towards a unified goal that everyone feels passionate about,” he says. “CUES will certainly witness this in her time as board chair.”

The same commitment that Sponem brings to CUES has prompted her to be involved in other CU and community organizations as well. She is chair of CUNA’s world affairs committee and also serves on its advocacy committee. Consistent with her emphasis on the cooperative model, she serves on the board of the Consumer Federation of America. She recently finished her term with the Federal Reserve’s Community Depository Institutions Advisory Council. She is also immediate past chair of the Corporate Central Credit Union board and serves on the board of the World Council of Credit Unions Foundation. Locally, she will soon step into the role of vice chair for the Greater Madison Chamber of Commerce.

On the home front, Sponem and her husband, Mark, have three children. Their daughter Aspen is attending her mother’s alma mater, while son Mason is at the University of Notre Dame. Ross, who was born shortly after his mother became CEO, is now a sophomore in high school. The family enjoys various sporting activities, including water skiing, snow skiing and boating. This year, Sponem has taken up two exciting new challenges—mountain biking and horseback riding.

In her career, Sponem will continue to be devoted to the CU mission that she first encountered as a young professional at CUES. “I believe that credit unions add tremendous value to their members and their communities,” she says, stressing that CUs offer an important choice in the financial services world.  “We’ve raised the bar in terms of what consumers can and should expect from their financial institution.”