Distinguishing Himself at an Early Age 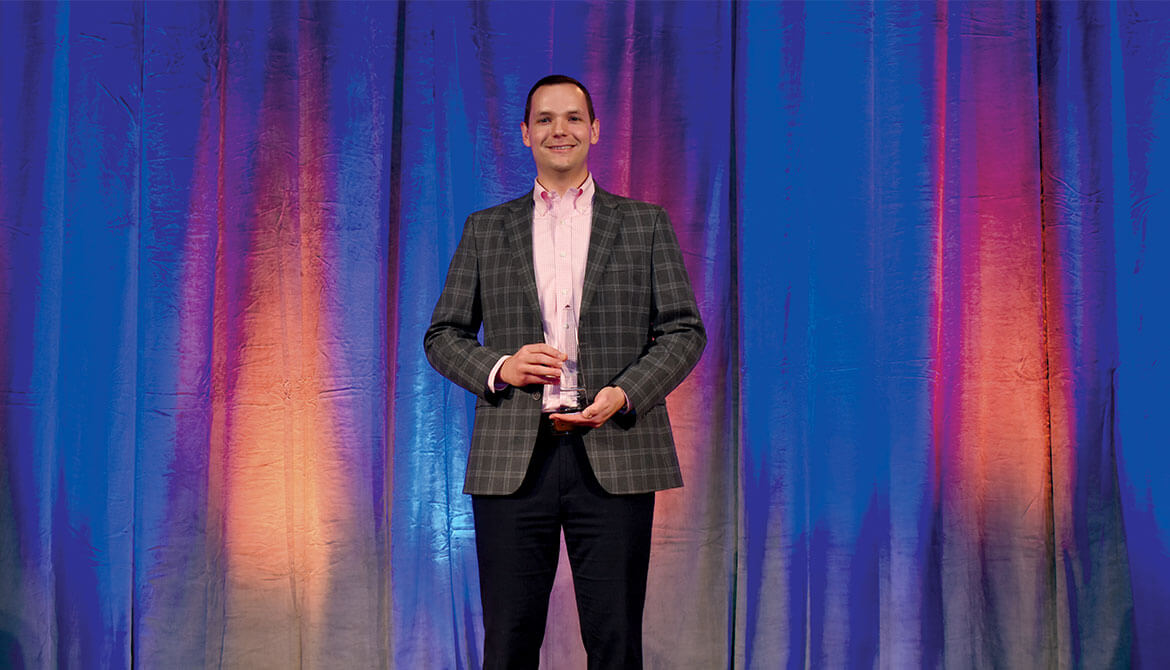 For James Sackett, the youngest recipient of the CUES Distinguished Director Award, a commitment to credit unions is in his DNA.

James Sackett’s selection as the 2018 CUES Distinguished Director proved to be a noteworthy milestone. At 32, he is the youngest person to have received this annual award, which was presented at Directors Conference in December in Waikoloa, Hawaii. He is also the first millennial to serve on the board of directors at his credit union, $1.3 billion Firefly Credit Union in Burnsville, Minnesota. Nonetheless, it’s not his age, but rather the CUES member’s strong commitment to the betterment of his credit union, that makes him a worthy recipient of this honor.

Sackett was 28 years old when he first took his seat in the Firefly CU boardroom, but in many ways, he was preparing to assume such a role his whole life. “I’ve been a credit union advocate and evangelist ever since I was kid,” says Sackett, who was born and raised in Eau Claire, Wisconsin. “I grew up in a credit union family and a credit union household.”

That’s a household, incidentally, where his father, John Sackett, has been a long-term board member of $2.3 million Royal Credit Union, including serving as chair for 17 years and as treasurer for 10 years. “My dad is one of those multi-decade board members,” Sackett reports. “He was on a credit union board when I was growing up, and he still serves [today].”

With his father as a role model, Sackett gravitated toward playing an active role in the credit union movement. “It’s something I’ve always been a part of and loved,” he says, “so it was a natural path for me to serve as a credit union volunteer in an official capacity.”

At Firefly CU, Sackett is the youngest voting member of an 11-member board, including two associate directors without voting privileges. The addition of Sackett and the associate board members, as well as the departure of some long-tenured directors, recently dropped the average age of the board from 59 to 45.

Encouraging younger representation is not intended to disparage the value of older board members, but to ensure that a broad range of viewpoints is included. “It’s not necessarily the label of millennial that’s important,” Sackett explains. “It’s the fact that we’re looking for diverse perspectives to be included on the board.”

Firefly CU’s Board Chair Sarah D. Lietz concurs. “We’ve made a conscious effort to have more diverse representation at Firefly on the board, and James is a really good example of that,” says Lietz, who has been on the board for nine years and has served as chair for four. However, she points out that Sackett’s age takes a back seat to the other important qualities he brings to the boardroom. “To me, his age is irrelevant. He could be 30 or he could be 70. What I love about him is his passion for moving us forward and pushing for excellence and accountability. I think that has less to do with age and more to do with his level of engagement and his enthusiasm for the credit union movement.”

Lietz is employed in the CU industry, serving as VP/owner engagement at MEMBERS Development Company LLC, a research and development CUSO based in Madison, Wisconsin, that is owned by about 70 large credit unions nationwide. As someone devoted to the CU industry, she appreciates the fact that Sackett has had a commitment to the movement dating back to his childhood. “It’s … in his DNA,” she says.

Sarah D. Lietz
Board Chair
Firefly Credit Union
We’ve made a conscious effort to have more diverse representation at Firefly on the board, and James is a really good example of that.

While age is not Sackett’s main qualification, it’s helpful to have a director from the all-important millennial generation, defined as those born between 1981 and 1996. At 73 million strong, millennials cannot be ignored. This year, according to Pew Research Center, they will become America’s largest adult population, dethroning the long-held dominance of the baby boomers.

“Millennials are a huge growth market,” Sackett confirms. “They’re going to be vital to the success of credit unions. We have a huge number of millennial employees at credit unions themselves, but they are tremendously underrepresented in the boardroom.”

However, millennials have to bring more than just their demographic identifier to a position on the board. “I think an important consideration—and something I took very seriously when I joined the board—is that it can’t just be a ‘check-the-box’ criterion,” Sackett says. “You can’t just have somebody who’s ‘younger.’ That person needs to be qualified, because at the end of the day, we are providing governance over an organization. We have a responsibility to provide the necessary accountability and expertise to do what is required of us.”

Additionally, as a millennial himself, Sackett can relate to what a younger CU member’s journey entails. His life revolves around family: He and his wife, Molly, have two young children—daughter Jemma, 2, and infant son Nolan. Sackett’s limited spare time is typically spent watching sports (he is a big Green Bay Packers football fan) and a few hobbies, such as his love for travel and aviation.

“Since I joined the board in January 2015, I’ve gotten engaged, I’ve gotten married, I’ve bought a house, I bought a car and I’ve had two kids,” Sackett says. “If that doesn’t say ‘target member’ to you, I don’t know what else would.”

A Career in Consulting

Sackett began his journey toward Firefly CU shortly after he graduated from the University of Wisconsin-Eau Claire with a degree in management information systems. He moved to Minneapolis, less than 100 miles away, and began a career in the consulting industry. “I always knew I wanted to go into consulting to get a diverse set of experiences to start my career, and I’ve stayed with it ever since,” he reports.

Over the last decade, Sackett has worked for three firms and has gained experience in the areas of IT, mergers and acquisitions, and healthcare. He currently works in the Minneapolis office of West Monroe Partners, a full-service consulting firm based in Chicago that employs approximately 1,000 business consultants and technical experts.

When he relocated to Minneapolis, Sackett joined Firefly CU at the recommendation of his brother, who was already a member. “Since we are a credit union family, we talk about these things,” Sackett explains. “After becoming a member, I reached out and began talking to their board liaison. It just so happened that they were doing an open call for director nominations, so I entered the process right then and there.”

Since becoming a member of the Firefly CU board of directors, Sackett has participated in many of the CU’s most important initiatives, including the search for a new CEO, the implementation of a board portal and the expanded use of social media.

An avid social media user himself, Sackett felt passionate about increasing the CU’s social media presence, which now includes a thriving Facebook page, more effective use of LinkedIn and plans for moving forward on Twitter and Instagram.

“From my perspective, social media is no longer a differentiator—it’s an expectation,” Sackett says. “Just a few years ago, if you had social media, you were ahead of the competition, but now if you don’t have it, you’re behind.”

Sackett has also pushed for a culture of continuous organizational and professional development, which has led to better-defined director training guidelines, an emphasis on board best practices and leveraging board meetings as an idea-sharing forum to fuel strategic discussions.

“Coming from a consulting background, I’m all about fostering an environment of continuous improvement,” Sackett says. “This often requires challenging the status quo—to see if what worked in the past is still working today. If it is not working, we know we need to take steps to improve it.” 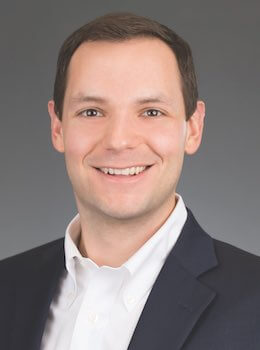 James Sackett
Director
Firefly Credit Union
Millennials are out there. They want to volunteer. They want to give back to the community, but they need to be presented with the opportunity.

Challenging the status quo is not easy, Sackett acknowledges. “I like to refer to myself as a respectful agitator, which means being willing to speak up and ask the hard questions. It’s easy for a board to fall victim to inertia, but we have to make sure that doesn’t happen.”

Sackett cites his suggestion that the board develop a formal merger and acquisition policy. “We haven’t had a merger in the recent past, so that was something we could easily have ignored. But I made the point that ... instead of looking backwards or where we’re at today, let’s consider where we might be five years from now. What if a merger opportunity comes along and we miss it because we’re not ready for it? As a board, we have a duty and responsibility to prepare for such situations if and when they come about.”

With that in mind, the board gave Sackett the OK to spearhead formalizing a mergers and acquisition policy, an area in which his consulting work proved especially relevant. The effort proved timely.

“There certainly is a macro-industry trend toward downsizing the number of credit unions and continuing consolidation,” Sackett says. “The burden to operate a small credit union has become so great that they tend to merge with a larger partner who can provide the support services and the scale required to handle the regulatory burdens.”

Sackett also sees mergers as a potential pathway to continuing growth for mid-sized and larger CUs. “A conversation we have in the boardroom frequently ... centers around growth. We’re all trying to grow by providing more benefits for our members, accessing new geography and so forth. It would be wrong to not at least consider and be prepared for mergers and acquisition as part of that story.”

Bringing Value to the Board

When he became a board member, Sackett recognized the need for education. “I learned through my dad a good amount of what goes on in the boardroom,” he says, “but I wanted to make sure I understood my true responsibilities as a director.”

To gain that perspective, Sackett has attended several professional development courses, including the CUES Director Development Seminar, to more fully understand the core responsibilities of a board member, the value of board committees and the keys to good governance.

“I have tailored my learning to things that are either particularly relevant growth areas for our credit union or are weaknesses within our board that would be helpful to shore up,” Sackett says.

While age alone is not a reason to join a CU board, Sackett stresses the benefits of recruiting younger directors who can build board experience and ensure a continuation of the values, vision and expertise they learn from older board members. However, he notes that recruitment is a challenge. “When I go to conferences ... without fail, I hear people asking, ‘How do we find younger board members?’ It seems that everybody wants them, but they aren’t taking the necessary steps to find them.”

For these CUs, Sackett has a few suggestions, including searching for potential candidates by scouring LinkedIn and reaching out to local employers and universities. Target your search for the specific skills, background or expertise that you would like in a director, he adds. In the end, those efforts will be worth it.

“Millennials are out there,” Sackett says. “They want to volunteer. They want to give back to the community, but they need to be presented with the opportunity.”  cues icon