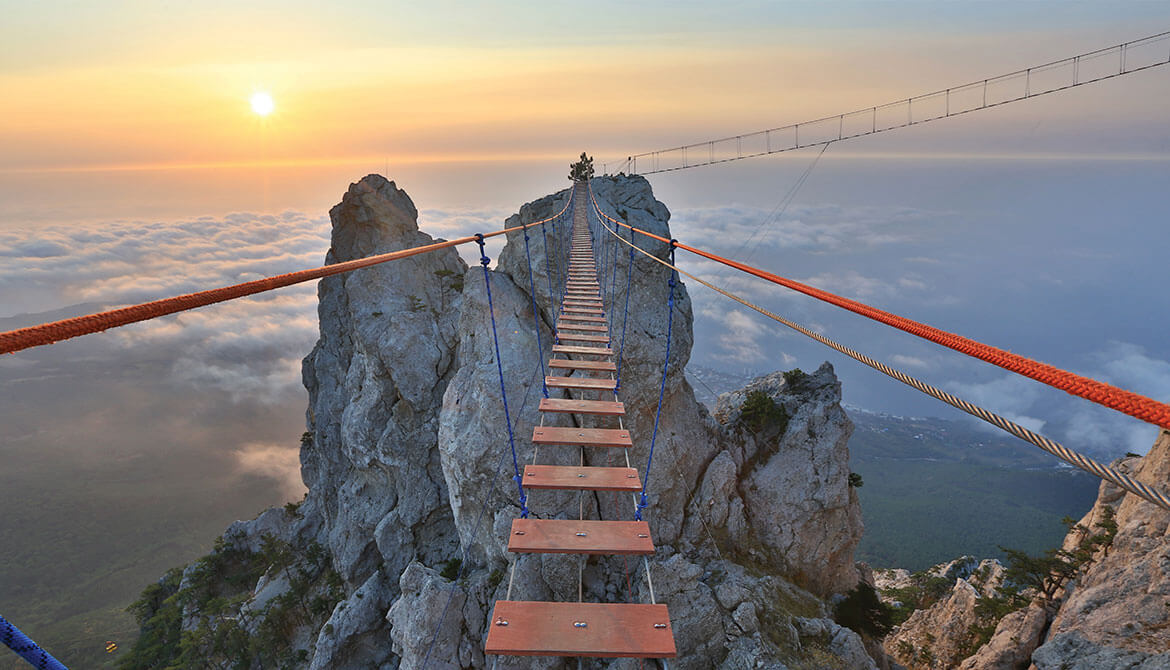 While credit union CEOs and other executives received healthy salary hikes and bonuses over the past year, the pace of those increases slowed slightly as compared to 2018 for more than half the positions included in the 2019 CUES Executive Compensation Survey.

“While increases for some of the positions have slowed a little bit, they are still much higher than the 3.1% that the World at Work survey identifies as increases across all sectors,” says Michael Becher, CPA, vice president of Industry Insights, Dublin, Ohio, which administers the CUES survey.

The steady increases in executive compensation reflect another strong year for credit unions, with the NCUA reporting a 9% increase in total loans, a 5.4% boost in total assets and an average 11.3% net worth ratio at year-end 2018. At the same time, salary and bonus decisions may be tempered by a recognition that the prolonged period of economic prosperity helping to drive those gains cannot last, Becher notes.

“There’s a possibility that credit unions are being a little more conservative just because the economy has been rolling so well for so long,” he says. With widespread concerns about how long the current boom can continue, credit unions may be “letting the foot off the accelerator” in terms of compensation.

Boards and executives are striving for a careful balance between the need to offer competitive pay and benefits in the current hot jobs market and less rosy forecasts for continued growth.

Given historic low unemployment rates, there is tremendous demand for executive talent—and for filling positions across the board. “There are a lot more jobs than there are people to fill them right now,” Becher notes. “It’s been 50 years since we’ve seen unemployment rates this low. But the reality is that credit unions can’t continue to increase executive pay 7, 8 or 9% every year. That’s just not sustainable.”

For other positions included in the survey, median total compensation increases run from 2.7% for senior credit union service organization executives to 7% for top mortgage lending officers. Total median compensation ranges from $260,419 for chief operating officers, $233,494 for chief financial officers and $229,316 for senior CUSO execs to $112,744 for regional branch management executives and $104,563 for business development executives. Total compensation is the sum of base salary, annual bonus or incentive pay, plus other taxable compensation. See the chart on p. 13 for the median base salary plus bonus comparison for a variety of positions. (In some cases, the base + bonus and total compensation numbers are the same.)

Michael Becher, CPA
Vice President
Industry Insights
There’s a possibility that credit unions are being a little more conservative just because the economy has been rolling so well for so long.

Boards continue to rely on bonuses to reward their CEOs: 88.3% of CEOs were reported to be eligible for bonuses, up from 87.7% in 2018 and 84.4% in 2017, with an average bonus amount of 17.2% of base pay. In comparison, the average bonus awarded in 2018 was 13.3% of base pay and 16.8% in 2017. Consistent with previous years, the top four factors for determining CEO bonuses are earnings, board evaluation, loan growth and membership growth.

These numbers demonstrate credit union boards’ continued commitment to recognize and reward CEOs for business gains. However, this may have been tempered over the past year by concerns about the potential for the economy cooling off, with some boards opting to offer a higher annual bonus and enhance other benefits instead of a significant salary boost, Becher notes. Continually increasing base salary locks the credit union into that level of compensation over the long term and as the basis for future pay increases, which may pose a challenge for expense control if financial performance declines during an economic slowdown.

Another factor guiding compensation and benefit discussions is executive longevity. With 34.3% of CEOs anticipating retirement in the next five years and another 31.1% within the decade, negotiations for long-term compensation may be receiving more attention. To prepare for that turnover at the top, 77.8% of credit unions participating in the survey said they have succession plans in place.

All CEO respondents reported being eligible for retirement benefits, with 94.5% participating in a 401(k) plan and 43.5% eligible for a 457(b) supplemental retirement program. In addition, 36.8% of CEOs reported eligibility for participation in a 457(f) long-term compensation plan, up from 34.8% last year.

A 457(b) plan permits executives to set aside more of their income to supplement retirement savings, while a 457(f) plan is an employer-funded deferred compensation program that a credit union might structure to reward and retain executives. (Read more about these plans in a free ebook.)

Rounding out common benefits and perquisites that figure into CEO total compensation are:

Michael Becher, CPA
It’s been 50 years since we’ve seen unemployment rates this low. But the reality is that credit unions can’t continue to increase executive pay 7, 8 or 9% every year. That’s just not sustainable.

The executive compensation survey also asks credit unions about the length and provisions in CEO contracts. The most common contract length is three years, and most executive agreements set out the circumstances under which severance pay will be awarded (85.9%) and how executive benefits are structured (59.3%).

With all the merger activity underway across the industry, provisions setting out change-in-control guidelines are now included in a majority (52.3%) of contracts, sometimes including requirements for a continuation of the contract (38.6%) and awarding of multiples of annual pay as severance (28.6%) in the event that the executive does not move forward with the continuing organization.

About a third of executive employment agreements also include covenants not to join a competing financial institution or company (32.8%) and not to solicit employees to move to the CEO’s next organization (31.3%). The median term on those restrictions is 12 months.

The CUES Executive Compensation Survey offers a wide range of options for subscribers to analyze salary, bonus and benefit trends with peer credit unions in custom reports by asset size, region, field of membership, number of members, number of employees and other factors.

High-level data is published in an annual executive summary that offers multiple views of compensation comparisons. Independent samples offer results from all respondents for a big-picture view, while same-sample data is limited to credit unions that participated in both the 2018 and 2019 surveys to permit more accurate depiction of trends. This summary is available at no additional cost to Unlimited+ CUES members. It is also available to other CUES membership levels and nonmembers as part of a purchased subscription to CUES’ dynamic online compensation reporting tool.

The compensation data can also be analyzed using median and average results. Three of the four tables presented with this story report median salary and bonus data, and the charts offering a year-to-year comparison are limited to the same-sample cohort. The 10-year comparison of compensation increases for CEOs reports averages for the same-sample group in each of those years.   cues icon 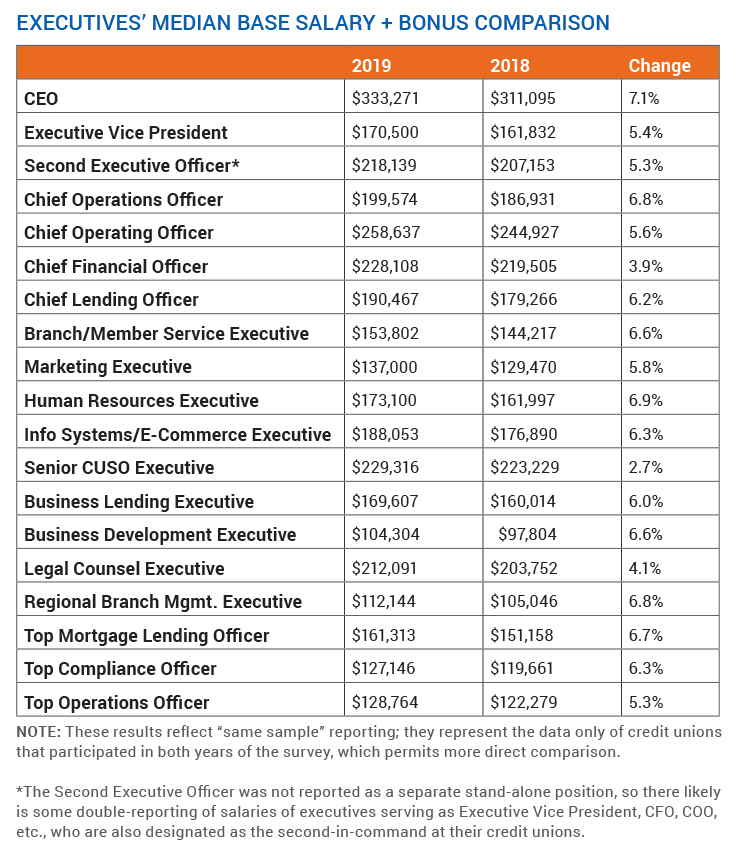