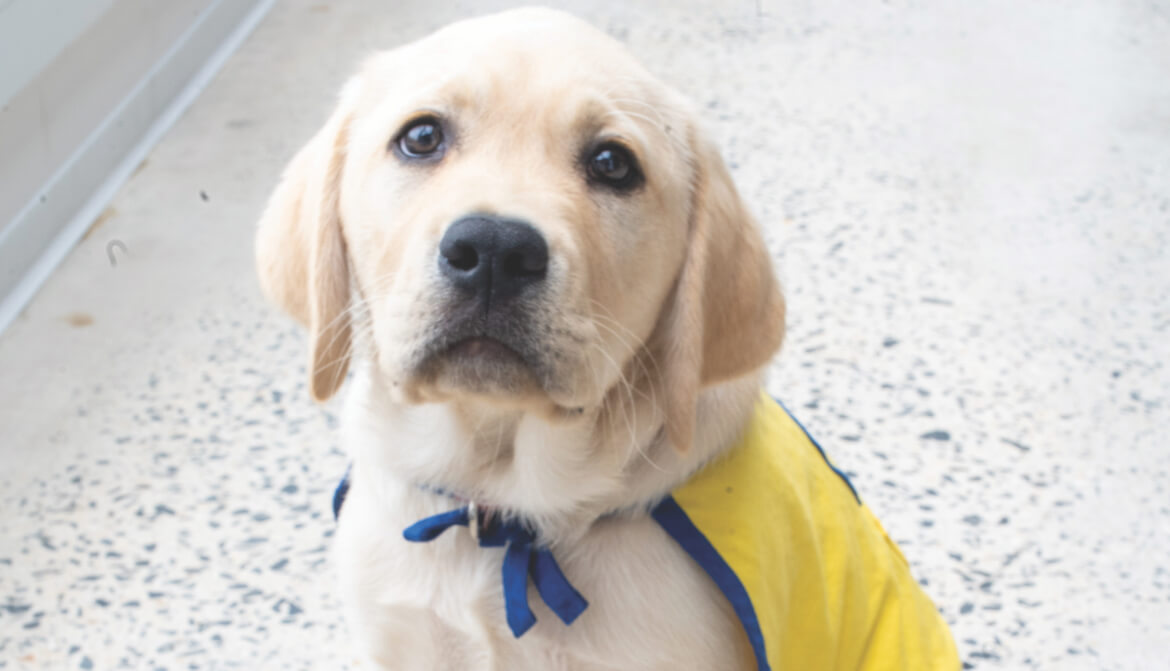 Meet Maverick, a yellow Labrador retriever with an impressive resume: He’s a member of the PenFed Credit Union team, social media star and assistance dog in training for a mission to transform the life of a person with disabilities.

Maverick is being raised by Andrea McCarren, VP/digital and chief content officer, and accompanies her daily to work and in her travels, even on the runway to gala fundraisers for the Canine Companions for Independence and other organizations that support veterans, military members and their families, causes supported by the $25 billion Tysons, Virginia, credit union.

He is one of three future assistance dogs that are a regular and welcome presence at PenFed offices. Admiral is being raised by Senior EVP Lisa Jennings, and Clint travels with Emma Phillips, university relations and campus recruitment lead, when she goes on college visits to recruit future employees. Thus far, PenFed CU has spent $100,000 in support of Canine Companions and the care of the three dogs as they learn basic commands and socialization skills over 18 months with their current humans before moving on for more intensive training and eventual placement.

During his time with McCarren, Maverick also has a gig as the first “social media influencer” for Chewy, the online pet supply company, and will earn a commission for every referral of new customers through his posts. “He’s donating all of it to the PenFed Foundation, which supports military families in need and Canine Companions,” she says.

“My previous service dog had a weekly reach on Facebook of 800,000 followers, so Maverick could actually make a sizable contribution to these organizations,” McCarren notes.

Over the years, her work with three assistance dogs “hijacked my social media posts,” she adds with a laugh. “I recently posted a reunion video with Nigel, who just graduated and will be working with veterans at a hospital in Philadelphia. Just on LinkedIn, that video got 175,000 views. People love dogs and cats, but the fact that these adorable puppies also have a life-changing mission tends to broaden the audience.”

Raising and training service dogs “is the greatest 24/7 volunteer gig on the planet,” McCarren says. “You meet so many people you would never have met, and you can really see the world from a new perspective and realize how hard it can be to get around for people with disabilities—if the door automator is down, the sidewalks have no curb cuts, or the pavement is broken. You develop an appreciation for the challenges they face every day.”

On a personal note, McCarren’s work on behalf of veterans with disabilities even led to a career change. The former television journalist was hosting an event for Wounded Warriors accompanied by a previous service dog where she met CUES member and PenFed CEO James Schenck, which led to her presentation at the CU on assistance dogs and then to discussions about launching a digital unit “to get the story about the credit union difference out there.”

McCarren joined the PenFed CU leadership team in January, and Maverick came on board in April. “He is an absolute stress reducer at work,” she notes. “It’s like everyone has a shared sense of purpose. We’re all preparing this dog for his mission.”

“The credit union is a great setting for that, with a great diversity of people from around the world of different ages and backgrounds,” she adds. “It’s really important for a puppy and future service dog to get acclimated to different people and settings.”cues icon