Paddling Faster Than the Currents of Change 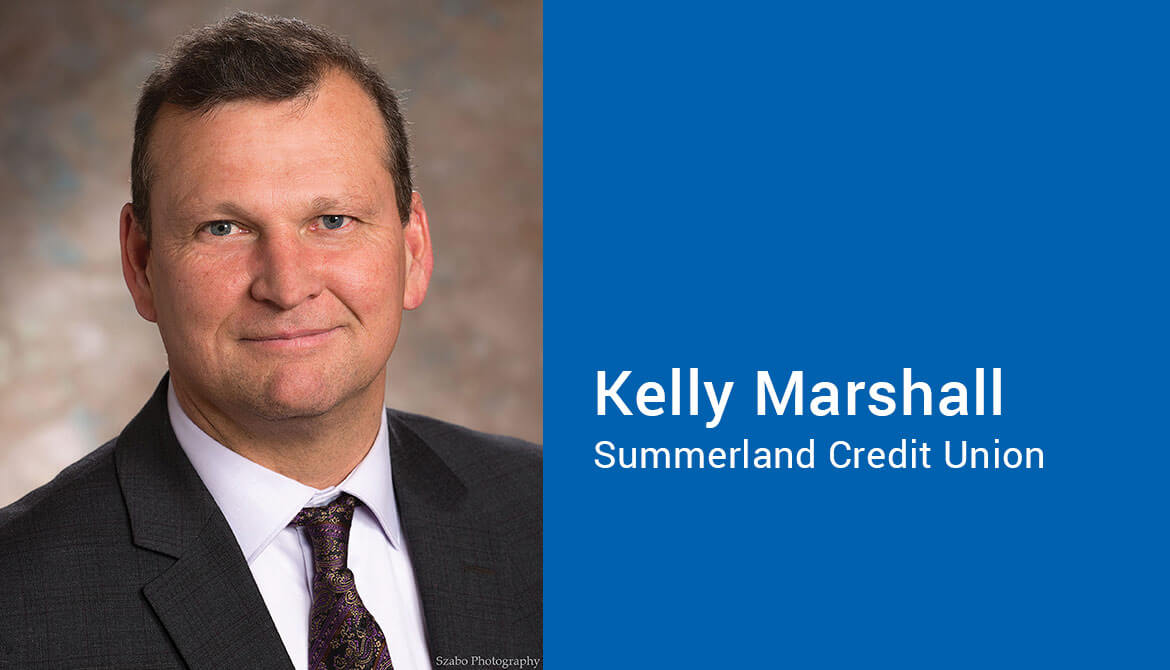 New board Chair Kelly Marshall leads CUES through a transformational era for the industry.

Kelly Marshall, CCE, CCD, ICD.D, president/CEO of $345 million Summerland Credit Union in Summerland, British Columbia, has taken on the chairmanship of the CUES Board at a time of profound change in the industry. Adapting to these changes requires great agility, Marshall contends, especially since the rate of change is poised to accelerate.

“I believe the transformational change we’ve experienced over the past several years is about to grow exponentially,” says Marshall. “We may be seeing a bit of a reprieve momentarily because of the pandemic, but anticipating what may occur with regard to innovations in technology, digitization, fintechs, big data, remote workforces, mergers and open banking, we have to be prepared to meet the challenges that will continue to influence and significantly change our business and economic models moving forward.”

Marshall, an avid outdoorsman, cites an anecdote from his own life as a way to describe the need for quick and decisive action to face these challenges head-on. Several years ago, he was on a glacial whitewater canoe trip in the Rocky Mountains in Alberta. His three companions were rugged veterans of this type of excursion, but as a rookie, Marshall felt some trepidation.

“We put our canoes into the water, and the first three-quarters of a mile, we descended 1,800 feet,” Marshall recalls. “I learned quickly that you had to paddle faster than the current in order to remain in control. I think the same can be said regarding the pace of change occurring outside of our organizations and how rapidly we must adapt to it from within.”

Adapting to this change requires credit union leaders to deploy effective strategies and empower individuals at all levels of their organizations.

“Now, more than ever, we need to be deliberate with our strategy and pragmatic in its execution so that we may carve out our niche in this often confusing and crowded marketplace,” Marshall asserts. “We’ll need to innovate, collaborate and cooperate to ensure that we continue to provide value to our current members and future generations of members. Those strategic conversations should occupy a large space on board agendas—not just discussed at once-a-year retreats.”

Kelly Marshall, CCE, CCD, ICD.D
President/CEO
Summerland Credit Union
Now, more than ever, we need to be deliberate with our strategy and pragmatic in its execution so that we may carve out our niche in this often confusing and crowded marketplace.

Marshall’s career in the Canadian credit union system spans three decades. The values he brought into that career were shaped by his upbringing in the small town of Smeaton, Saskatchewan, where he lived with his parents and two sisters and had a close-knit extended family of grandparents, aunts, uncles and cousins living nearby.

“I think you start out in life trying to construct a value system, and as you grow and mature, you begin to look for a community that shares those same values,” Marshall says. “For me, that community was the credit union system and the people who are part of it.”

Prior to moving into the credit union field, Marshall worked in roadway maintenance and construction while taking university-level correspondence courses to further his job prospects. At the time, he and his wife also were busy raising a family.

When Marshall was offered a job as a teller at a local branch of Prince Albert Credit Union, he accepted the position with an eye toward a career. Over the next 11 years, Marshall worked his way through the ranks at the credit union, eventually becoming manager of retail operations for the 10 branch locations and call center. (As the result of a 2006 merger, Prince Albert CU is now part of $6.5 billion Conexus Credit Union, headquartered in Regina, Saskatchewan.)

Early in the new millennium, Marshall left Saskatchewan for an opportunity to become CEO at Edson Credit Union in Edson, Alberta. He spent five years as CEO at the credit union (which in 2019 became part of $17.3 billion Servus Credit Union, headquartered in Edmonton Alberta). In 2006, he relocated again—this time to become president/CEO at Summerland CU. Situated in the desirable Okanagan region of British Columbia, the locale proved an added draw for Marshall, who could enjoy such pastimes as hiking, swimming and fishing while also leading a larger credit union.

Coming to Summerland CU as CEO, Marshall had to fill the shoes of a predecessor who had led the organization for 37 years. Taking over the reins from such a well-established figure in the organization was a daunting proposition, but CUES member Lorrie Forde, CCD, who was serving on the board at the time of the transition, reports that Marshall handled it well.

“Our staff—and the board too—were a little nervous when Kelly’s predecessor retired, as he’d been there ‘forever,’” recalls Forde, who currently serves as board chair for the credit union. “But within days of Kelly’s arrival, he was able to win over even the most cynical.”

Since then, Summerland CU has continued to benefit from Marshall’s people skills. “No matter how busy his day, his willingness to take the time to listen fully leaves his people feeling valued and important,” Forde says. “The emotional intelligence he brings to his role shows up in his ability to simultaneously lead and be one of the team. Kelly cares and isn’t afraid to show it, but ... he never loses sight of the organization’s strategic vision, the bottom line and his role. Being able to juggle these priorities is a masterful skill.”

Using these skills, Marshall has been able to lead the Summerland CU to strong growth over the 14 years he has been with the organization. He attributes these results to a strong focus on collaboration and inclusivity. “I believe in empowerment, diversity of opinion, and using the strengths and skills of my team in tackling challenges,” he says. “This type of approach yields better solutions and creates cohesion around those challenges. I think it’s important for us to realize, as leaders, that we don’t necessarily have all the answers.”

Putting the focus on workforce empowerment has had a positive impact on how the 35 employees at Summerland CU view the organization. As verification of this, Marshall points to the organization being named in consecutive years as one of the Best Companies to Work for in British Columbia by BCBusiness magazine.

Another top honor that Summerland CU has received was the title of Best Credit Union and Bank for the South Okanagan Region, from Okanagan Life magazine, an honor that Marshall attributes to the organization’s high level of service coupled with competitive pricing.

“To have reached $345 million in assets with only 35 employees means we’re ultra-efficient, and that allows us to pass those savings on to our membership,” he says.

Forde, who has worked closely with Marshall on many projects, appreciates the stellar leadership skills he brings to the table to further the organization’s growth. “His attention to detail, willingness to go above and beyond (every time), business acumen, personal integrity, ability to lead with heart, and creative and innovative thinking—even in a regulated and traditional field—are just a few of the strengths he brings to whatever role he’s in.”

All of this bodes well for the long-term success of Summerland CU, Forde adds. “Kelly always has one eye on the future. He considers trends and isn’t afraid to embrace innovation but always with an eye for evidence of stability or enough authority to influence the development of that security. … Kelly is a ‘what-you-see-is-what-you-get’ kind of guy. He is able to influence when needed. He’s self-aware and empathetic, courageous and willing to have critical conversations, and he does all of it from a place of respect.”

Lorrie Forde, CCD
Director
Summerland Credit Union
No matter how busy his day, his willingness to take the time to listen fully leaves his people feeling valued and important.

Concurrent with steering Summerland CU to such positive results, Marshall has been active in many key industry organizations. He began serving as a director for CUES in 2016 before ascending into his new role as chair in August 2020. He additionally serves the organization as a CUES Canada Council member.

“Over my career, I’ve had the great fortune to be included and involved in the evolution of our system at the local, provincial and national level,” Marshall reports. Currently, he serves as board chair of Stabilization Central Credit Union, a Vancouver-based organization in British Columbia that helps credit unions that face governance, operational or financial challenges.

With this wide array of experience, Marshall has gained insights into the unique strengths of both Canadian and U.S. CUs—and the challenges they face. “I believe there’s a lot that our two credit union systems can learn from one another,” he says. “Each system has brilliant examples of successful business models, strategies and innovations that can help one another be stronger and more successful. I know of several credit unions on both sides that have gone on field trips to explore and research best practices across the border, and for some, that research has transformed their organizations.”

An Advocate for Learning

Marshall sees great value in the educational and networking opportunities provided by industry organizations. An advocate of lifelong learning, he has completed several industry educational programs. Through CUES, he has earned his CCE (Certified Chief Executive) and CCD (Certified CU Director) designations. He also graduated with honors from the Credit Union Institute of Canada with a specialty in lending studies, and is an accredited Canadian Credit Union Director and a graduate of the Institute of Corporate Directors Program, currently holding the ICD.D designation.

In his role as CUES chair, Marshall affirms that CUES will continue to emphasize its focus on education, even though the pandemic has necessitated creative measures for maintaining the educational experience.

“We will continue to evolve and adapt to delivering education digitally, but post-pandemic, I believe it will be important to continue to offer conferences and other educational opportunities that provide those in our industry with the opportunity to meet face to face and discuss common challenges,” Marshall contends. “CUES is one of the critical vehicles in our industry for providing such opportunities.”

Marshall also is appreciative of the networking opportunities that these programs afford, attesting from personal experience that they not only provide a forum for dialogue and learning but have also been the source of long-term friendships. “Many of the people I’ve met have been and continue to be a source of inspirational learning for me,” he says. “This is a wonderful industry. We make a difference to people, and I love being a part of that.”

And just as CEOs must paddle quickly to keep up with the pace of change, Marshall will lead CUES with an eye toward responding to the changes and challenges that lie ahead.

“I think every industry is facing disruption, and CUES is not immune to that change,” Marshall observes. “We have a great foundation with our focus on development for executives, employees and directors by delivering timely and pertinent educational experiences and opportunities. As an organization, much like credit unions themselves, we’ll have to continue to adapt our strategy and our business model to ensure relevancy and value creation for our members.”  cues icon