The Gift of an Apology 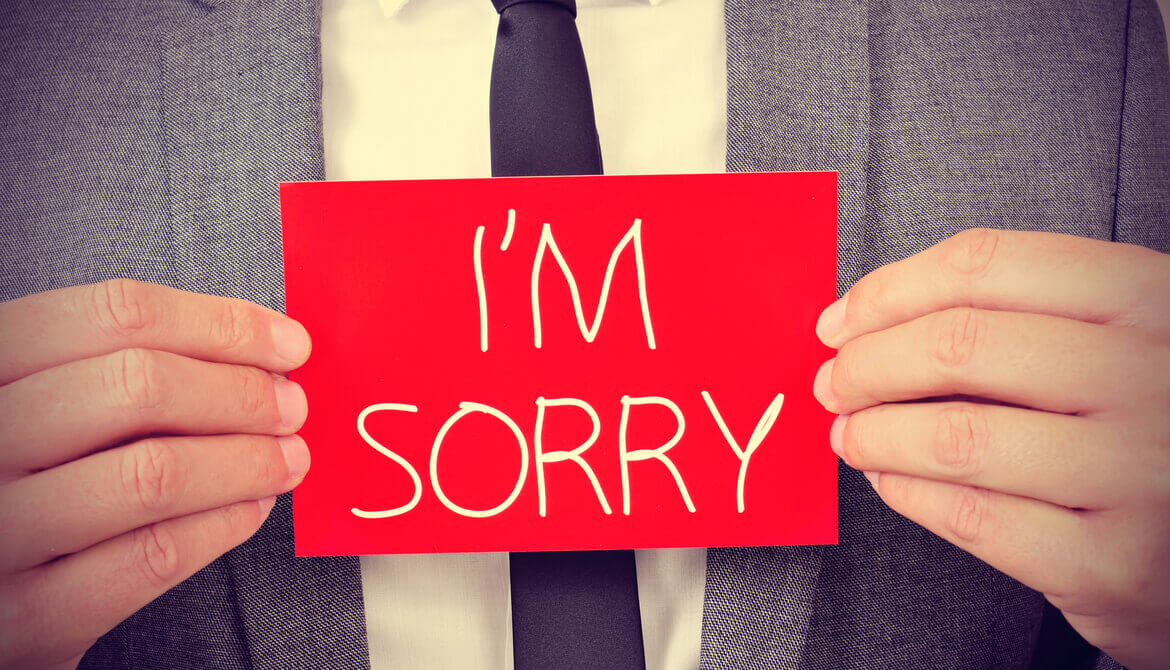 To apologize well, put aside your intentions, draw on empathy and follow these six steps.

If you struggle with apologizing, fret not. Many people struggle in this area due in large part to not fully understanding nor having an appreciation for an apology, whether giving or receiving.

If you randomly ask 10 people why someone would say they are sorry or why someone would apologize, you would hear “admission of wrongdoing” as the No. 1 reason. Since most people believe offering an apology is an admission of guilt, then, when they do not believe they have done anything wrong or cannot see that they have done anything wrong, they will be reluctant to apologize—even believe that an apology will cause more harm than good. It would be safe to say they do not understand the gift of an apology.

I have often wondered if this reluctance to apologize has its roots in childhood forced apologies. Those happened when an adult witnessed two or more children interacting and one child’s behavior towards another was deemed inappropriate. The adult observer saw the child commit what the adult believed to be a grave indiscretion. It was not the child’s intention to cause harm.

This wise and noble adult recognized, nevertheless, that one child was hurt and had the offending child apologize, usually without providing an explanation. Adults, while well-meaning, can forget that children are still learning to navigate the social constructs of individual relationships, and this forced apology can impact a child’s ability to understand the importance of apologizing for one’s transgressions.

One thing that impedes our acknowledging we have done harm is standing/hiding behind our intent. When faced with examining whether we have emotionally harmed someone, there is a tendency to stand behind our “intentions.” If you have ever heard yourself say, “It was not my intent” or “That wasn’t what I meant,” as a defense, you are standing behind your intentions. In other words, when we rationalize within ourselves that it was not our intent to hurt, not our intent to cause harm or betray a trust, we cannot recognize we have done something wrong.

If we do not recognize that we have done something wrong, it will prevent us from looking at our behavior from the other person’s perspective. When we begin to see how our behavior might have been harmful, hurtful or a betrayal, we begin to understand and experience empathy. Empathy is the art of putting oneself in another’s experience to get a sense of what they might be feeling. Expressing empathy for the other person will then allow you to see the healing power of apologizing.

The first step to apologizing is having empathy for the other person’s experience of what was said or done—for what the other person might be telling themselves about your motive or intentions. Without your realizing it, offering an apology is an offer to bring healing. The person who has been injured wants to be healed, wants to regain the connection they had with you before the infraction happened.

The “injury” caused the injured party to be guarded in their behavior, their words—to withdraw, shut down and not be fully self-expressed with you. They are unsure if you can be trusted with their heart, secrets, opinions. They would like to be hopeful and enjoy all that life has to offer; however, because they have been hurt, rejected, abandoned, betrayed, disrespected, or whatever it might be, it is difficult for them to be with you. You might be unaware of that harm because sometimes the harm was indeed unintentional.

When present to the fact that sometimes we trigger hurt in people, a hurt due to past situations that they still hold on to, we can be catalysts for them to be healed from past transgressions by offering them the gift of an apology. And, yes, an apology has the power to heal hurtful, painful experiences. It can restore trust and create an environment of safety. Saying “I’m sorry” or “I apologize for…” breaks down walls and barriers to effective communication, and restores, strengthens and deepens emotional connections.

Though it may look or sound simple, do not underestimate the power of an effective apology. It has been shown to mend a broken heart, restore faith, and renew hope. With all of this being at stake, you will want to ensure the effectiveness of your apology.

Unsure of how to craft an apology, or wondering if you are doing it correctly? The second step to apologizing is learning how to do it. According to Lauren M. Bloom, J.D., the author of The Art of the Apology, there are six essential elements for an apology to be effective.

By combining all six of the aforementioned elements, you now have the makings for the gift of an effective apology.

JaiDei Jackson is a Licensed Professional Counselor, National Certified Counselor, Prepare Enrich Facilitator and, because she wasn’t busy enough, a Certified Public Accountant. She has been extensively trained in cognitive behavioral, solution-focused and EMDR therapy. She loves to work with people struggling in their intimate relationships, including birth or blended families, and work or other life relationships by providing a space where healing can take place. She specializes in male-friendly life coaching and individual counseling that is goal-oriented, focused on solutions, collaborative, direct and actionable. Reach her on her website and at Instagram @JaiDeiJackson, Facebook: @JaiDei.Jackson or YouTube:  JaiDei Jackson.