Leadership That Inspires and Empowers 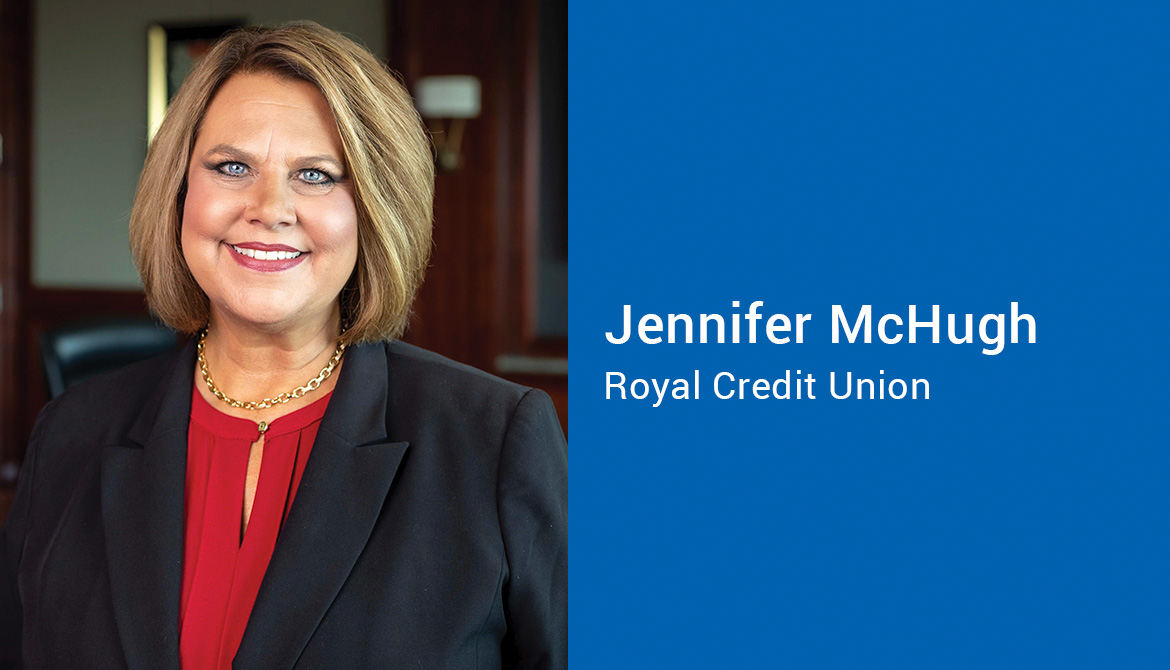 Jennifer McHugh, VP/community engagement at $3.8 billion Royal Credit Union, Eau Claire, Wisconsin, was chosen as the 2021 CUES Exceptional Leader, and with that honor has come contemplation about what leadership means.

“I keep coming back to two words: inspire and empower,” says McHugh, who leads a team of 16 women in Royal CU’s community engagement department, serving 235,000 members in Wisconsin and Minnesota. “That’s what I’m trying to accomplish with my team. I want to inspire them to think about what they can do to make a difference. And I want to empower them to come up with ideas for products, services and programs that will make a positive impact in the communities we serve.”

Being an exceptional leader often starts with having an exceptional mentor, and McHugh considers herself fortunate that her predecessor, Vicki Hoehn, filled that role for her. McHugh spent nine years working for Hoehn—as community relations manager from 2011 to 2015 and as director of public affairs and financial education from 2015 to 2020.

“Vicki taught me everything she knew,” reports McHugh, a CUES member. “She helped put me in a position to compete for her position when she retired. There were no guarantees, but she gave me opportunities to develop my skills.”

Since succeeding Hoehn in 2020, McHugh has followed her example by mentoring others. “That’s my main focus and goal—to help the 15 other people in my department grow and find their passion,” she says.

“If a team member expresses a desire to be in leadership, we’ll work together to get them into that program,” McHugh says. “Not everyone wants to be a leader, and that’s okay. Again, it’s about helping people find their passion and purpose.”

Jan Johnson, SPHR, SHRM-SCP, Royal CU’s EVP/organizational agility, enumerates many qualities that make McHugh an exceptional leader, including her ability to create, reinvent, collaborate and communicate. “Jen sets the bar high for herself,” Johnson says. “She is also a role model for self-development, continuous learning and applying lessons learned while simultaneously encouraging and assisting others to achieve their potential.”

Jennifer McHugh
VP/Community Engagement
Royal Credit Union
I have been privileged to have the support of exceptional mentors over the years. I love being in a role that allows me to impact careers like others have impacted mine.

McHugh first learned about credit unions when she was growing up in Rockford, Illinois. Her mother, an elementary school teacher, had a savings account at a local credit union for educators. “Mom’s credit union savings account helped fund my first college degree,” McHugh recalls. “Credit unions financially empower individuals, strengthen families and change lives, including my own.”

After earning her Bachelor of Arts in Journalism from Northern Illinois University in 1993, McHugh embarked on a career in broadcast journalism. She spent seven years as a TV reporter and news anchor in three markets, including her hometown of Rockford. She then became public relations/marketing director for the University of Illinois College of Medicine.

In 2005, McHugh relocated from Rockford to Eau Claire when her husband, Terry, took a job as VP/general manager of a local TV station. McHugh became communications manager for Sacred Heart Hospital, which is where she met her future mentor.

“Vicki was on the board of directors for the foundation of the hospital, and I could tell she was a real go-getter,” McHugh recalls. “She was so inspiring and someone I knew I could learn from.”

When Hoehn needed to fill an opening for a community relations manager, McHugh jumped at the chance to work with her. “Vicki changed the trajectory of my career and helped me find a home with credit unions,” McHugh says. “I’ll always be thankful for that.”

McHugh assumed the VP role in March 2020, just as the COVID-19 pandemic was forcing lockdowns all over the country. “We were packing our boxes to go home and work at the same time that Vicki was packing her box to retire,” McHugh recalls. “I had just landed my dream job, and here came the pandemic.”

Johnson reports that the pandemic was an immediate test of McHugh’s leadership. “The week that Jen took over her current role, her highly collaborative and cohesive team was disbursed to work from home,” she says.

Thanks to strong leadership skills and what Johnson characterizes as “authentic empathy,” McHugh was able to motivate her team under stressful circumstances. “Jen’s guidance, in a new role that she herself was learning, enabled her team to stay connected and find new ways to continue making the Royal difference in our communities,” Johnson says.

Among the challenges that McHugh and her team faced was converting the credit union’s signature financial education programs to virtual formats. One of those programs is School $ense, which was launched by Hoehn in 1993 and has grown to include 29 student-run credit union locations in high schools, middle schools and elementary schools.

Student savings are at the heart of the program, and during the pandemic, McHugh’s team arranged to pick up weekly deposits through a lockbox system. “We were able to keep students in the habit of saving, which is what the program is all about,” McHugh says.

Royal CU also has a financial education program for correctional facilities, encompassing several county jails and a state-run correctional treatment facility. “We provide education to individuals at those facilities so they’ll be better able to manage their finances when they return to their communities,” McHugh reports. “During the pandemic, we were able to buy some equipment for some of the facilities and teach the classes virtually.”

Other financial education programs include a reality fair for high school students, branded as Test Drive: Next Stop Reality, and Takeover Day Featuring the Superheroes of Saving for elementary school children. Both programs attracted thousands of student participants in their virtual formats.

“I’m so proud of how our team responded in finding new ways to stay connected with the public,” McHugh says. “We were able to pull together quickly and figure out how to get financial education into the hands of those who need it the most.”

A few months into the pandemic, Royal CU’s market area—which includes Minneapolis/St. Paul—was shaken by the social unrest that occurred in the aftermath of George Floyd’s murder. Local businesses, many owned by people of color, experienced severe property damage.

“We pulled together as a team and talked through various options of what we could do to help,” McHugh reports. Royal CU contributed to the Frogtown & Rondo Community Business Recovery Fund, raising more than $30,000 to help businesses in a particularly hard-hit neighborhood get back on track.

Internally, the spotlight on social issues led to the formation of Engage in Change, an employee group launched by two of McHugh’s team members, Melissa Janssen and Brittany O’Malley. They arranged for outside speakers to address the group on such topics as the practice of redlining in lending and how to be more respectful and compassionate when communicating with others.

“We’ve learned and grown together as a team by having a safe environment to talk through issues related to DEI,” McHugh says.

While McHugh is committed to her team’s professional growth, she is likewise committed to her own growth. This year, she earned a Master of Arts in Strategic Communication and Innovation from Texas Tech University. While the classes were virtual, McHugh attended the graduation ceremony in Lubbock, Texas, so that she could meet a student with whom she bonded online.

McHugh also is active in a variety of community and civic organizations. She currently serves on the Wisconsin Governor’s Council on Financial Literacy and Capability, having been appointed and re-appointed by two successive governors.

Outside of her professional life, she and Terry enjoy spending time at their cabin in northern Wisconsin. The couple are diehard fans of the Chicago Cubs and Chicago Bears, and they have a long-time passion for adopting rescue dogs.

“I’m grateful to Terry for supporting my career, and for making me a ‘bonus’ mom and grandmother of three stepchildren and five grandchildren,” McHugh says.

No matter how busy her schedule, McHugh always will prioritize being a mentor to her team. “I have been privileged to have the support of exceptional mentors over the years. I love being in a role that allows me to impact careers like others have impacted mine.”  cues icon