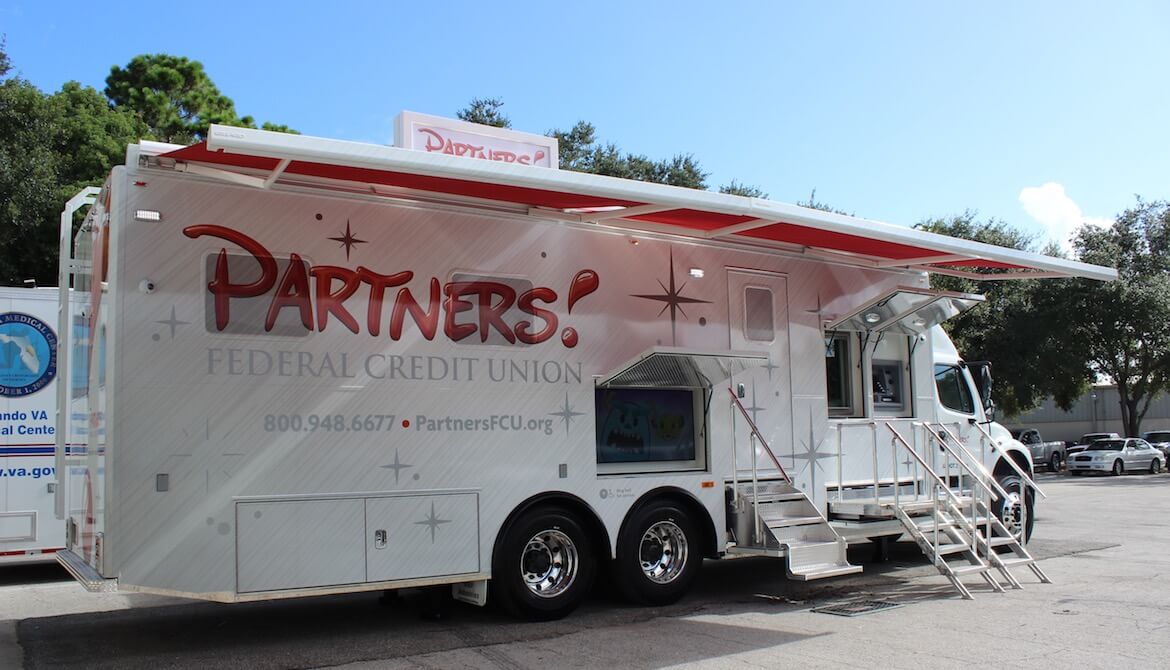 Animal Kingdom is one of the more remote destinations in Walt Disney World—not a place where you’d expect to find a credit union office. But Disney “Cast Members” who belong to Partners Federal Credit Union can count on regular visits from a mobile branch that rolls up to their exotic workplace.

Partners FCU launched its branch on wheels in September as a way to better serve members working across the 45 square miles of the Orlando, Fla., destination. Leaders at Walt Disney Parks and Resorts can reserve visits from the mobile branch, and its 30-day schedule is available online, says Chris Parker, chief member services officer of the $1.5 billion CU serving 126,000 members in California and Florida.

“The goal is to increase access and convenience for all members by delivering personalized service wherever they may need it,” Parker says.

The idea for the mobile branch grew out of an annual Team Innovation Lab the credit union organizes to encourage cross-functional teams on both coasts to develop and share ideas via video presentations. Out of the 20 presentations shared in the 2014 lab, the proposal for a mobile branch for which leaders around the Disney complex could schedule visits “won us all over,” says CEO and CUES member John Janclaes, CCD.

The mobile branch, which was custom-built by MBF Industries, Sanford, Fla., is a full-service branch with a walk-up ATM, three-member service stations inside and a 55-inch LED TV under the awning outside so business development officers can share video presentations with prospective members. (Watch a video of the branch at https://youtu.be/hYrYh25yBT0.)

The vehicle can be outfitted as a mobile education/conference center with room for a dozen people attending a financial seminar, Parker says. It also provides business continuity in case of natural disasters, like the recent threat posed by Hurricane Matthew. In fact, the vehicle was stocked up with bottled water and other supplies in case it was needed when the hurricane rolled through in October.

When not in use, the mobile branch is stored in a secure domed facility operated by Golden Sands, which also supplies its drivers.

Partners FCU is collecting and analyzing data from the first few weeks of mobile branch service: transaction volume, services requested and most popular hours. The branch is typically on site for an eight-hour shift, from 8 a.m. to 4 p.m. or 9 a.m. to 5 p.m., for example, but the CU might test later hours to see if an occasional 11 a.m. to 7 p.m. shift works better for members. The costs to outfit, operate and maintain the mobile branch might end up being about the same as a stationary facility, but the level of member service and visibility it offers make it a worthwhile investment, Parker says.

Karen Bankston is a long-time contributor to Credit Union Management and writes about credit unions, membership growth, marketing, operations and technology. She is the proprietor of Precision Prose, Portland, Ore.