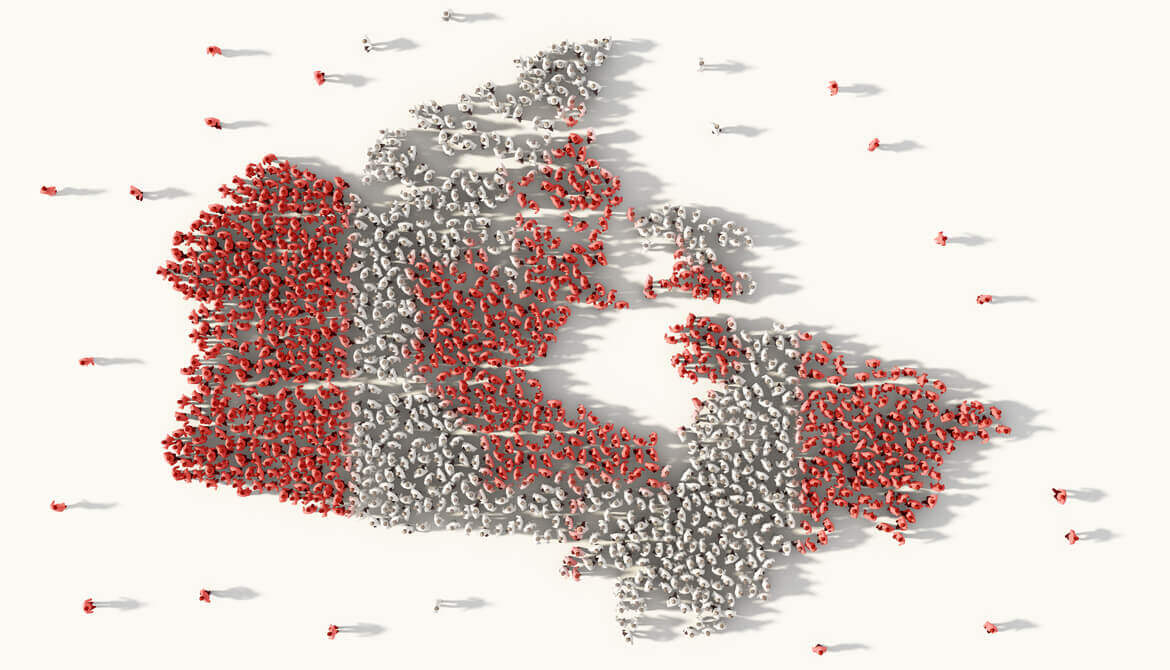 Why some CUs have moved—or are considering a switch—to federal regulation to grow operations.

It’s been more than a decade since credit unions in Canada first sought the right to be federally regulated so they could operate from coast-to-coast-to-coast.

Existing regulations prohibited them from lending to businesses that had expanded into a neighboring province or accepting deposits from potential members who lived in the wrong spot.

After several years of lobbying, the law was changed in 2012, but so far only two credit unions have worked their way along the long, winding regulatory road to achieve federal status, while two others are on the journey. But interest in joining them continues to be strong, with many credit unions at least considering the possibility and asking questions.

Under the British North America Act that founded Canada in 1867, banks could only be regulated by the federal government and their deposits are insured federally. But 50 years later, when the first credit union, Civil Service Savings and Loan Society (now Alterna Savings), was created in Ottawa to serve the growing civil service, credit unions were regulated by the provinces. This made sense because they were small, local ventures taking local deposits and lending that money out in the community.

That split continued until 2012 when the federal government, prodded by $19.6 billion Coast Capital Savings, based in Surrey, British Columbia, with 572,000 members, and the Canadian Credit Union Association, Toronto, the national trade association, changed the law to permit existing provincial credit unions to become federally regulated. The change would allow organizations to do business in any province but required them to follow tough compliance and risk regulations that apply to all Canadian banks, and switch deposit insurance to the Canada Deposit Insurance Corporation, which guarantees accounts up to $100,000.

“For over a decade, Coast [Capital CU] has wanted to go national. Most important was a genuine conviction that the credit union commitment to cooperative financial well-being and people over profit really needed to be brought out at the federal level,” says Dave Cunningham, the CU’s VP/public affairs & communications.

For several years after it became legal, no credit union started on the federal path, in part because most provinces offer deposit insurance programs that are much better (with higher limits) than the federal plan and credit unions knew that could be a major stumbling block to getting member approval for the switch. Finally, in 2016, the federal government announced a transition program to assuage those concerns.

But the first federal credit union was a truly unique situation. UNI Financial Cooperation, a francophone credit union based in Caraquet, New Brunswick, was the first to get federal approval in mid-2016, 18 months after members had backed the change.

CEO Robert Moreau explains that for $4.3 billion UNI Financial, with 165,000 members, being federally regulated was only a small part of its transformation. The New Brunswick financial system was divided between francophone and anglophone divisions that were operated and regulated separately. Members in the francophone system backed a plan to merge all their credit unions, known as caisse populaires, their central, and the stabilization board that backed them and regulated them, into one new organization—UNI Financial. At the same time, UNI moved to come under federal regulation.

“Our organization was getting too big to fail for the regulator,” Moreau says. “It was a different set of circumstances for us. They encouraged us to move from a provincial regulator to a national regulator.”

Now, the credit union has one board, one CEO and different branches branded UNI, Moreau says. The transition to a modern organization continues. In May 2019, UNI announced it would close 12 of its 51 branches this year as it deals with the transition to digital banking. Moreau says he expects the pace of change to be even quicker in coming years.

Coast Capital CU’s journey to federal status also took time. It 2016, 79% of the nearly 80,000 members who voted were in favour of it becoming a federal credit union. After a comprehensive review, the BC Financial Institutions Commission granted its approval to proceed in August 2017. Then, in October 2018 the federal Office of the Superintendent of Financial Institutions gave its OK.

One change for Coast Capital CU and for the British Columbia credit union system was that once it became a federal organization, it no longer had to hold liquidity with its provincial central, Central 1 Credit Union, in order to meet regulatory requirements. When the CU withdrew about $2 billion in deposits from Central 1, it was a blow to the central’s balance sheet and potential revenue.

$10 billion/250,000-member First West Credit Union, Langley, British Columbia, is in the early stages of going federal. It, too, will also be pulling money out of Central 1 CU, which says it can manage the changes.

“As noted in our annual report, while Coast Capital’s decision did impact our balance sheet, our fundamentals remain strong and stable,” says Sheila Vokey, CFO at Central 1 CU. “Should other credit unions become federally regulated, we would plan for the transition and manage our balance sheet accordingly.”

In its first year as a federal credit union, Coast Capital CU has focused on expanding its commercial lending in Alberta and Ontario, hiring three lenders in the Toronto area, and building capacity to handle a national membership, Cunningham says.

Anyone in Canada can now become a member online, but Coast Capital CU has not actively pursued new members.

Bank Subsidiaries: Another Route to Growth

Several other large credit unions–Vancity, Meridian and Alterna Savings–have taken another route to serving a national audience by creating a banking subsidiary. Cunningham said that Coast Capital CU considered that option but wanted to “be a cooperative and to be offering that cooperative choice at the national level.”

Becoming a federal credit union will make it easier to partner with credit unions that may want to merge or share services. Cunningham expects consolidation in the credit union system will continue, and growing regulatory complexity may also force some smaller organizations to seek partners.

Bill Maurin, CEO of $18 billion Meridian Credit Union, with 351,000 members, St. Catharines, Ontario, and CEO of its online-only motusbank subsidiary, says it considered the federal credit union route, but decided in 2016 that seeking a banking charter would be simpler and quicker.

“Our intent was to take the Meridian value proposition out on a national scope, initially for retail members and longer term for our business banking members as well,” Maurin says. “We wanted to leverage the investments we’ve been making in our digital channel and other initiatives. The question was how do we get more scale, realizing that Ontario has a population that is the least credit union-friendly [among all Canadian provinces], with 43% of the population saying they will not bank with a credit union.”

Motusbank launched in April and has exceeded Meridian CU’s goals for growth in membership, deposits and loans. The surprise has been the slow uptake in mortgages. “The area where we had a gap was retail mortgages, which was a surprise because we thought as a new FI it would be easier to give you money than to take your money, but it turns out to be the opposite.”

Maurin says that the biggest difference between provincial regulation of Meridian CU and federal regulation of motusbank has been “on the compliance requirements and the rigour around that with the federal consumer protection legislation.”

One of Meridian CU’s main goals is to reduce risk by geographically diversifying its commercial lending portfolio, which has grown rapidly in recent years.

A Path to More Deposits

Innovation Credit Union, with $2.8 billion in assets based in Swift Current, Saskatchewan, is likely to be the next credit union to receive approval to operate federally. CUES member and CEO Daniel Johnson says the main reason it sought the change is its need to attract new deposits, which is a challenge in a province that is not growing.

“We’re not looking to take over Canada or take over the world. All we need in order for Innovation to be successful is a sliver of a sliver of a certain demographic in Canada and we believe that we will resolve our funding risk and also continue to grow and evolve as an organization.”

Innovation CU currently has 51,000 members and hopes to double that number when it is able to offer services outside Saskatchewan. In the lead up to the vote on whether to go federal, it had contact with 29,000 of its members and Johnson led 63 town hall sessions.

We’re not looking to take over Canada or take over the world. All we need in order for innovation to be successful is a sliver of a sliver of a certain demographic in Canada and we believe that we will resolve our funding risk and also continue to grow and evolve as an organization.
Daniel Johnson
CEO
Innovation Credit Union

A segment that received particular attention was a small group of wealthy members who will be impacted when the credit union moves from unlimited deposit insurance in Saskatchewan to $100,000 per account federally.

“We had 71 members who had $190 million, so we knew we had to have conversations with those folks who would be impacted by the change in the deposit protection environment,” Johnson says.

He says Innovation CU is probably a year or so away from getting federal approval to proceed. The credit union is looking at high growth cities with universities and colleges because it feels those are the places it can attract members and talented staff. It currently has 22 people working out of a Regina office located at the University of Regina. Johnson says the credit union seeks the talent it needs wherever the people may be.

$10 billion First West Credit Union, based in Langley, British Columbia, is the other credit union that is working its way through the transition process. It has filed its pre-application information with OSFI, the federal regulator, and is holding discussions with FICOM, the B.C. regulator. Once the pre-application is approved, the CU expects to hold a membership vote in 2020 and then move to a formal application.

“Our divisional brands are variations of their former credit union names,” First West says on its website. “These brands have been part of their communities for generations and have attained considerable brand affinity.” Being part of the larger network has enabled the brands to offer new products and services and reduce back-office costs.

“We intend to extend our business reach by aggregating with select Canadian credit unions who are member-centred and well-managed,” First West says.

The discussion of federal credit unions comes at a time when regulations are being reviewed in both British Columbia and Ontario. The legislation that governs credit unions in each of these provinces is up for review. In addition, Ontario recently established the Financial Services Regulatory Authority that has assumed credit union oversight. The new body was recommended by an expert panel that sought to improve consumer protection and credit union agility.

In British Columbia, the Financial Institutions Commission that regulates credit unions is transitioning to become part of the B.C. Financial Services Authority, a Crown corporation, rather than a government agency. (Note to our American readers: In Canada, Crown corporations enjoy greater freedom and less government oversight.) The provincial auditor recommended this change after a review in 2017 found FICOM was unable to carry out all the required audits of credit unions because of staff shortages caused by low wages due to a long-term government wage freeze. The Crown agency will be able to set its own salaries and retain any surplus fees from the industry, that in the past were transferred to the province’s general revenue.

Art Chamberlain is a writer based in Campbellford, Ontario, with almost 15 years working with and writing about credit unions.