Coming Together for the Common Good 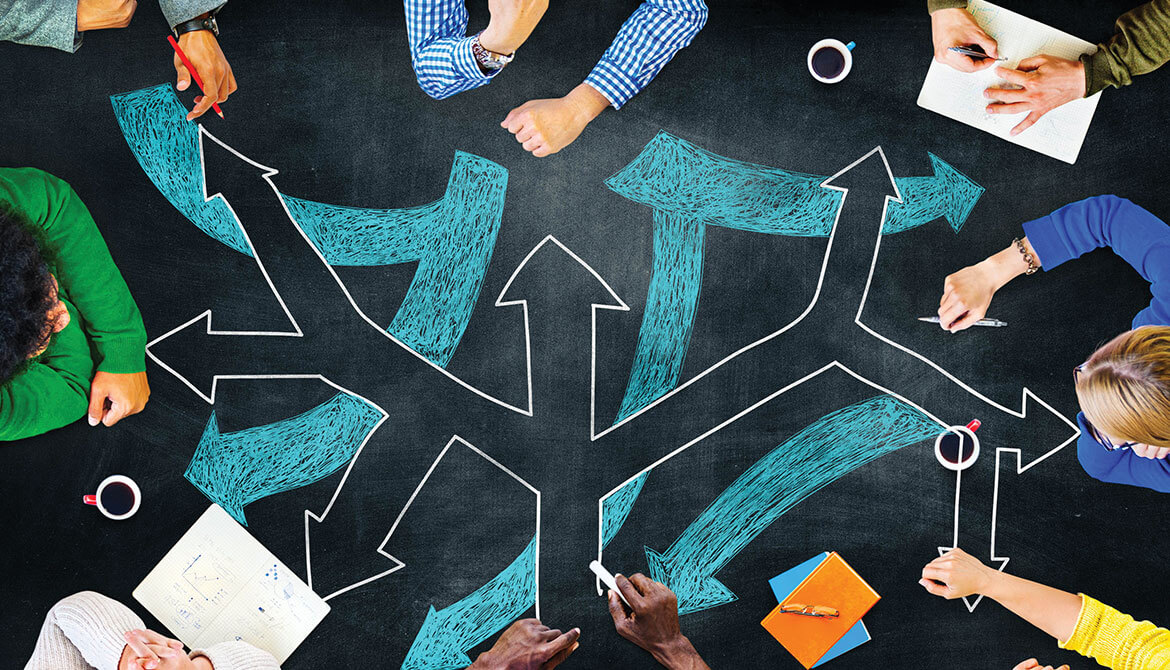 Wouldn’t it be wonderful if there was a simple, no-fuss, one-size-fits-all model that we as leaders of our credit unions could apply—be it in the boardroom or in the halls of our CUs’ administrative offices—that could assure us that we were making the right decisions? Wouldn’t it be nice to know we’re making the best decisions that always put our members’ interests first while delivering the most effective outcomes for our credit unions? Unfortunately, it’s not that easy.

A former colleague from what was then the Ethics Resource Center, a Washington, D.C., think tank and consultancy, used to say that decisions are the hardest when there are two competing values at play. And we think he’s right. It’s easy to make good decisions when the options are black and white, good and bad, positive and negative. Should you merge with the larger, more solvent credit union when yours is hours away from shutting its doors? Is the core conversion a go when you have the funds to switch and your current system is on its last legs? Should you promote the current VP/finance to CFO when she’s fully capable, has the requisite skills, the backing of the board, a great relationship with you (the CEO) and the trust of senior management? It’s easy to see how you can quickly get to “yes” on these questions and many others.

But when you and your colleagues are in the boardroom—or managing your credit union from the C-suite—how do you make decisions when the questions are not as clear? What do you do when there are two important, competing values at play?How does a credit union decide between “serving member interests” and “ensuring the financial safety and soundness of the credit union?” How do you balance the credit union’s ongoing health and meaningful outreach in the community?

Perhaps the most important job of board members and senior management alike is to ask questions that lead to not only expeditious decision-making but the right decisions.

Commit to Having the Hard Conversation

First and foremost, begin by committing to having the hard conversations that you need to have in both the boardroom and the C-suite. While researching for the soon-to-be-released 2020 State of Credit Union Governance report, we found that more than a third of respondents said their boards do only an adequate or less-than-adequate job of asking the hard questions that need to be asked. And yet, the same study found that boards report overwhelmingly that they are “making quality decisions.” How can this be?

Fundamental to effective decision-making is ensuring that, as credit union leaders, you are upping your game in terms of asking hard questions. What do we mean by “hard questions?” Perhaps the most important job of board members and senior management alike is to ask questions that lead to not only expeditious decision-making but the right decisions for the credit union and ultimately for members. If you fail to do so, you’re not living up to your role and responsibility—either as a volunteer or as a paid leader of your credit union.

Being open and inviting multiple perspectives into difficult conversations is critical to decision-making. It’s vital to ensure that every voice in the room is heard. Remember, that your credit union is a nonprofit governed by a board of directors, not a privately owned company led by a chairman/CEO. By design, the strength of a cooperative leadership structure comes from the chorus of voices that governs it—even though at times it may be cumbersome. (Remember cooperative principle No. 2, democratic member control?

Be Conscious of Unconscious Thought

Daniel Kahneman is an Israeli-American psychologist and economist who won a Nobel prize for his work on judgment and decision-making, much of it outlined in his book Thinking, Fast and Slow. In the book, Kahneman suggests that for the most part, individuals spend about 90% of their time “thinking fast,” or motivated by subconscious or unconscious thought, and only 10% of their time “thinking slow,” or motivated by rational or conscious thought.

What does this have to do with the decisions coming before your credit union’s board and senior management? Well, everything. 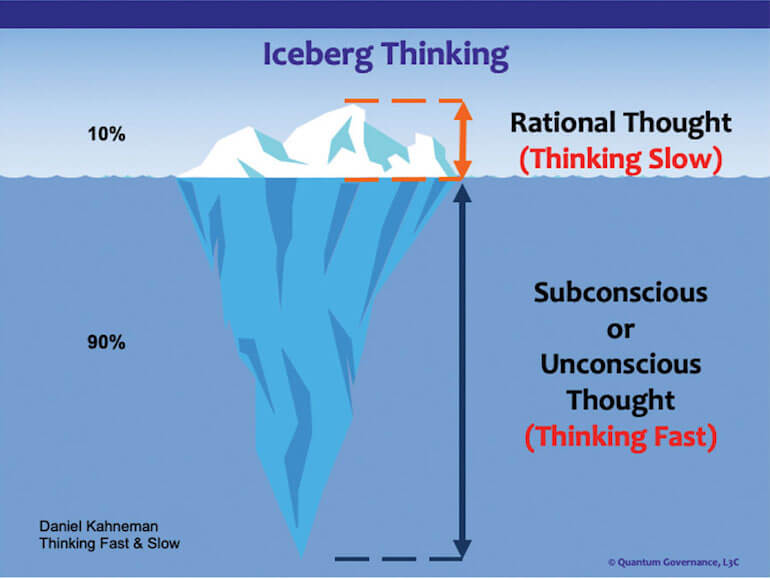 It means that everyone in the boardroom or in the C-suite is coming to the table with their own biases, and they are largely subconscious. And these decision-makers are, believe it or not, largely driven by those biases.

Remember that discussion that you had about moving away from brick and mortar? Or the presentation that your CEO and her team made to the board on that potential merger? What about the discussions you’ve been having in executive session about the CEO’s variable pay? All of these discussions and more are being seen through different lenses by various board members and senior leaders.

A board member who believes in high-touch customer service and relishes the personal connection with the tellers in his local branch will forever believe that brick and mortar is the way to go.

Legacy board members may be deeply concerned about what a merger might mean for their own board positions. And finally, the executive director at the homeless shelter who serves on your board will likely find the CEO’s pay enviable and maybe even too generous, regardless of performance. Remember, these perspectives—even if they are unconscious—are always at play, and they have an impact on each and every meeting and in each and every conversation, whether we want to believe it or not.

Be Clear About What Consensus Means ... and What It Doesn’t

Another critical component to effective decision-making is to understand the concept of consensus as it is designed to operate in the credit union boardroom. The reality is that a significant number of credit union leaders still believe that consensus exists only when everyone is in complete agreement—what some would term “absolute consensus” or simply “unanimity.” Sure, it feels great when we can all agree with a motion or proposal. And yes, sometimes a thoughtful compromise is the best course. But absolute consensus or unanimity—while desirable or comforting at times—is not necessary to make good decisions in the boardroom. Indeed, there are even times when insistence on unanimity may cause a proposal or initiative to become a mere shell of what it once was. If meaningful changes are made just to satisfy one or two hold-out votes, an initiative may become so modified or watered-down that it may no longer add the significant value that the original proposal offered.

What, then, is an appropriate degree of consensus in the boardroom?

Merriam-Webster defines it as “a general agreement about something.” Note the word “general.” It involves coming to an agreement to support a decision that is in the best interest of the whole. The process of coming to consensus is designed to afford everyone an opportunity to share their thoughts and opinions about the subject at hand. Yep, there it is again—genuinely hearing everyone’s voice.

Consensus in the boardroom, therefore, does not require unanimity. What it does require is you and your colleagues asking the hard questions, challenging your values, raising your subconscious thinking to the conscious level and coming to a decision that is in the best interest of the whole. Not everyone may agree when you come to a consensus, but if you have a quorum, a majority of those voting on the matter are generally considered a consensus on regular matters coming before the board. (Note that the Federal Credit Union Bylaws, published by the National Credit Union Administration include only a simple majority—50% plus one voting member for a motion to pass.) And remember, once the final vote is taken on a matter, the decision has been made. The entire board is now expected to speak with one voice ... even if you were one of the members voting against the motion.

Be Transparent About Your Decision-Making

We end where we began, by sharing a lesson from our days at the Ethics Resource Center. We had the good fortune to work with a select group of researchers—ethics officers at Fortune 500 companies, consultants and practitioners from around the nation—in a program we developed called the ERC Fellows Program. Together, we took on leading questions and issues in the field of business ethics. One such question was, “What makes for an ethical leader?” Surprisingly enough, our research led us back to decision-making.

When announcing critical decisions, be certain to acknowledge the ethical issues (competing values or even subconscious thinking) inherent in the situation being addressed and how the proposed solution (the decision) addresses those ethical issues.

When discussing the ethics of key decisions, publicly acknowledge the difficulty of resolving such dilemmas and challenges and your awareness of the fact that ethical people could reasonably disagree on how best to resolve the dilemma. (Remember, you and your colleagues will prioritize different values, and this is where subconscious thinking will emerge!)

Insist that your direct reports (or for boards, the CEO and senior management) talk you through the ethics of their decisions for review and/or approval at the same level of detail they discuss other business considerations. (But do so without micromanaging the CEO/senior management!)

Given the unique role of credit union leaders as stewards of their members’ funds, we believe the role of the credit union leader—be they volunteer or paid—as effective decision-makers is paramount. Have the courage to ask the hard questions. Engage all of the voices in your boardrooms, volunteers and senior management alike. Be conscious of both rational and subconscious thought. Know what consensus really means and what it doesn’t. And be clear about the decisions you make—all for the betterment of your members.   cues icon

Michael Daigneault, CCD, is the CEO of Quantum Governance L3C, Herndon, Virginia, CUES’ strategic provider for governance services. Daigneault has more than 30 years of experience in the field of governance, management, strategy, planning and facilitation, and served as an Executive in Residence at CUES Governance Leadership Institute (cues.org/gli).

Jennie Boden serves as the firm’s managing director of strategic relationships and a senior consultant. She has 25-plus years of experience in the national nonprofit sector and served as the chief staff officer for two nonprofits before coming to Quantum Governance.