Improving the Lives of Others 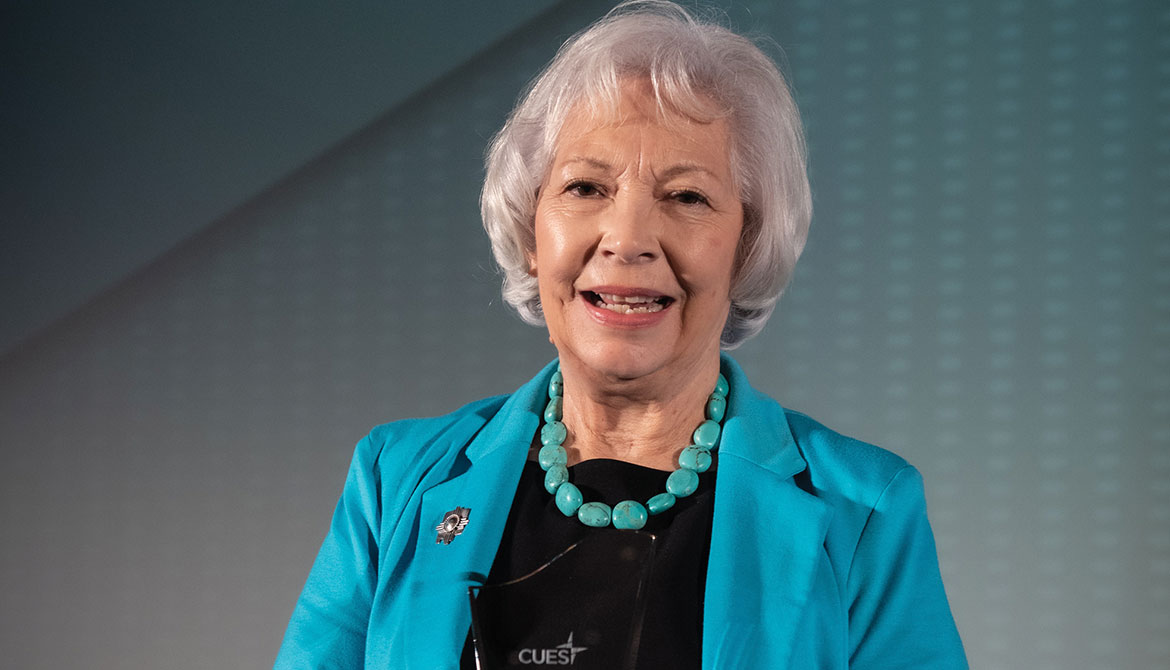 Linda Medina has dedicated herself to a lifetime of service, with a career in state government and a quarter-century of volunteerism in the credit union movement.

Currently serving as board chair of Guadalupe Credit Union in Santa Fe, New Mexico, Medina firmly supports the credit union tenet of people helping people improve their financial lives. She is especially supportive of giving those in need the opportunity to better themselves.

“I’m very proud of the fact that we are helping the community and low-income individuals reach their goals,” says Medina, who was recently named the 2019 CUES Distinguished Director. The Distinguished Director honor is given annually in recognition of a board or committee member whose actions have helped strengthen their credit union and the industry. Medina received her award during the 2019 Directors Conference, which took place Dec. 8-11 in Orlando, Florida.

Medina, a CUES member, has been a volunteer for Guadalupe CU since 1994. In total, she has served eight years on the supervisory committee and 17 years on the board of directors. She currently is serving her second consecutive term as chair.

During Medina’s 25 years of service, Guadalupe CU has grown from less than $20 million to over $180 million in assets and from 4,800 members to over 21,600 (as of October 2019). A major accomplishment during her board tenure has been the organization’s transition into a community development financial institution—a CDFI—in 2010. With this designation, Guadalupe CU has dedicated itself to providing affordable lending and financial counseling to low-income, low-wealth and disadvantaged individuals as a means of helping them join the economic mainstream.

“We revised our policies and procedures to be inclusive and serve anyone within our field of membership, regardless of immigration status,” Medina reports. “We’ve helped low-income members—and not only members but also other people in the community. We’ve done a lot of education, such as school reality fairs, and provided financial counseling to our members.”

CUES member Winona Nava, I-CUDE, president/CEO of Guadalupe CU, reports that Medina’s support and leadership have been instrumental in keeping the organization focused on its mission of serving recent immigrants and other underserved populations in the CU’s community. Nava admits that there were times of contention over the pursuit of this mission, but through it all, Medina offered steadfast encouragement. “Linda was adamant in her resolve that GCU stay true to this mission and vision, even when others on the board were not supportive,” Nava says.

Guadalupe CU’s focus on financial counseling and education has helped community members learn how to become better at managing their financial lives. This education has encompassed a variety of subjects—from teaching people how to budget to helping them understand what it takes to buy a home and pay a mortgage.

This is compatible with the credit union’s mission of giving those who are overlooked by other financial institutions a place to turn to meet their financial needs. In helping these individuals, Guadalupe CU has seen an uptick in its membership and asset growth.

“It’s not big depositors—it’s small depositors, and our loans continue to grow,” Medina says. She acknowledges that not all the borrowers have perfect credit scores, “but because of our financial counseling, we don’t have a very high delinquent loan rate. So, what we’re doing with education is making a difference.”

Nava confirms that Guadalupe CU is holding the line regarding delinquencies. “Over 36% of GCU loan balances in dollars, and over 50% of the number of GCU loans, are to borrowers with invisible credit or credit scores below prime. In spite of this, GCU’s delinquency ratio is .65%, which is in line with peer,” Nava reports. “The charge-off ratio is .55%, which is slightly higher than peer.”

In addition, the financial coaching that Guadalupe CU provides is helping individuals make discernable improvements in their creditworthiness. A few figures from an annual report outline the coaching program’s success: Of those participating in counseling, 44% achieved one or more of their financial goals. For those in counseling for at least four to six months, 58% improved their credit score by an average of 42 points. Additionally, 48% reduced their debt by an average of more than $5,000.

One factor driving this score is Guadalupe CU’s approach to serving its members. As Nava explains, “GCU has far more employees than [most] credit unions of our size in order to provide the individualized attention many of the underserved members need.”

Medina has spent most of her life in the state capital of Santa Fe, but she was born and raised about 17 miles to the north of the city, in a small community called Pojoaque. “The town was so small that it didn’t even have streetlights,” Medina recalls.

This small-town experience was essentially like living out in the country—but what beautiful country it was. The town of Pojoaque neighbors Pojoaque Pueblo, one of the eight northern pueblos of New Mexico, an area rich with Native American culture and traditions.

Medina’s family consisted of her father and mother, the late Carlos and Genevive Quintana, and four children. “I’m the oldest—and the shortest,” Medina reports. “I guess my parents were saving the height for the others. My brother is 6-foot-2, my sisters are 5-foot-6 and 5-foot-4, but I never made it to 5-foot-2.”

Growing up in a small community, Medina yearned to see more of the world around her. She left Pojoaque to attend New Mexico State University in Las Cruces, about 300 miles south of her hometown.

Enjoying the experience of living in a bigger city, Medina later moved back north to Santa Fe, where she started her career in state government. Her first position was with the Department of Finance and Administration. She then went on to work for a variety of other departments, including Human Services, Health & Environment, Regulation & Licensing, and Tax & Revenue. Eventually she took a job with the state auditor’s office, spending the remainder of her 28-year career in state government there before retiring.Medina’s work in state government led her to participate in a variety of organizations, both professional and charitable. She served as secretary of the Santa Fe Chapter of the American Business Women’s Association and as president of the New Mexico Association of Government Accountants. She was also an audit advisor for a Public Academy for Performing Arts charter school and has volunteered for Habitat for Humanity.

Linda Medina
Board Chair
Guadalupe Credit Union
Because of our financial counseling, we don’t have a very high delinquent loan rate. … What we’re doing with education is making a difference.

In 1978, Medina took a fateful step by becoming a member of Guadalupe CU. “I guess I was at the credit union often enough that they knew me,” she says. “In 1994, when I was working for the Department of Regulation & Licensing, they suggested I run for the supervisory committee.”

Medina attained that position, serving as a member of the supervisory committee from 1994 to 1999. After that, she was elected to the board of directors, serving five three-year terms, which included several terms as chair. After 15 consecutive years, she was required to depart the board due to term limits.

“I still felt like I could contribute in some way, so I ran for the supervisory committee a second time and was lucky enough to be elected,” Medina recalls.

As her term on the supervisory committee was expiring in 2018, Medina decided to throw her hat in the ring to fill a vacancy on the board. “Once again, I was lucky enough to win and was immediately voted in as board chair,” she reports.

Medina’s volunteerism at Guadalupe CU has cemented her opinion that credit unions provide an advantage over other banking options. “Initially I joined the credit union because it was locally owned,” she recalls. “It was not a big bank, so the money stayed in the community. I’ve always been interested and committed to that. They essentially have the same products and services as banks, but they return their earnings to the members and not to a small group of investors. They’re friendly and willing to help in any way, and there is a set of core values that shows up in their everyday work.”

During her tenure on the board, Medina has done what she can to make a difference. “Linda is always there to represent the credit union at community events, whether it be testifying for immigrant rights, serving Frito pies to members on International Credit Union Day or advocating with our local elected officials,” Nava says.

In addition, Medina has volunteered at the state and national level for the Credit Union Association of New Mexico and CUNA respectively. “Her support for the credit union movement is unwavering,” Nava reports. “She has vision, dedication, strong ethics and a selfless desire to serve.”

Medina has always been devoted to family. She is the mother of two and grandmother of three. Son Justin is married to Jenifer; they live in Yakima, Washington, with their children, Natalie and Hunter. Daughter Marisa and granddaughter Milena live in Albuquerque, about 65 miles from Santa Fe.

Now that she is retired, Medina has more time for personal pursuits. She enjoys driving and has taken several road trips, mostly around the western United States. Other hobbies include working in her yard and caring for her indoor plants. She also loves to read and is methodically making her way through the list of 100 books that were chosen by national survey for the PBS series The Great American Read. “I’ve already read about 45 or 46,” she reports.

Within the last decade, one of the most fulfilling experiences of Medina’s life was serving as her mother’s caregiver. She moved into her mother’s home in Albuquerque to do so. “My siblings helped, as well as my daughter and granddaughter,” she recalls. “We took care of her for 10 years, and I wouldn’t have missed it for anything.”

Medina’s love of family is something she brings to her work in the credit union movement. She appreciates how Guadalupe CU lives up to its motto: “More than banking, we’re family.”

Not long ago, the board and management of the credit union set aside some time to talk about issues related to the organization’s branding. “We spent a day working with an outside consultant to consider the possibility of changing our motto. In the end, we decided not to change it because that’s who we are—we’re family. We work together to help others.”

It is because of this familial atmosphere that exists among the board and staff that Guadalupe CU has been able to serve its members effectively. In her role as board chair, Medina is particularly grateful to her fellow board members for working collectively to move the credit union forward. “Without them and our ability to agree on goals and work together as a family, GCU wouldn’t continue to achieve as much as we have,” she says.  cues icon