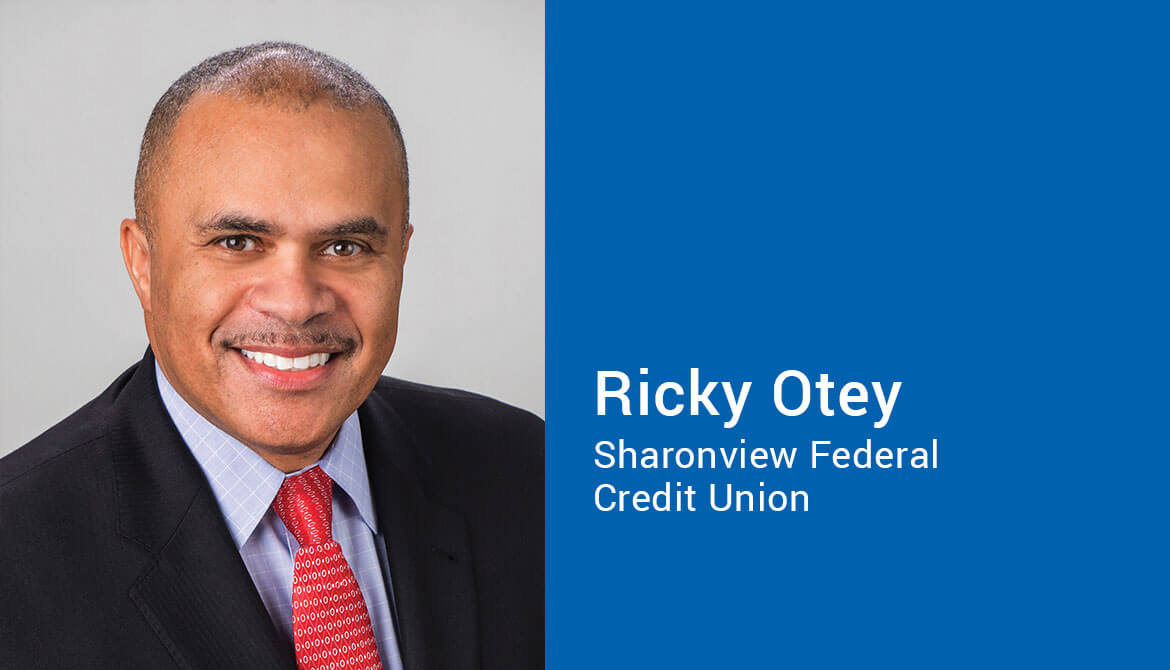 Ricky Otey, executive vice president and chief operating officer at $1.7 billion Sharonview Federal Credit Union, has served as a top-level executive at several major financial institutions during a career that has spanned three decades. Yet even after amassing such vast experience, he still considers himself a student of leadership. Just two years ago, Otey completed his MBA at the age of 50. He’s also a connoisseur of business management books, seeking out the best ideas in his never-ending quest to refine his skills.

“I take leadership very seriously,” says Otey, who has been with the Indian Land, South Carolina-based credit union for 6 1/2 years. “I view leadership as a privilege, not a right. When you accept the responsibility of leadership, you take on responsibility for others. You forfeit your right to have a bad day. You forfeit your right to phone it in. People are counting on you to be consistent, to be honest and to be transparent.”

Otey lives up to his own high standards for leadership, which made him a stellar choice for the 2020 CUES Exceptional Leader Award. Those who work with him most closely attest that he is definitely worthy of this award.

“One of Ricky’s major strengths is his ability to build relationships,” says CUES member Bill Partin, CIE, president/CEO of Sharonview. “He sets clear expectations with full accountability and does a great job of coaching those relationships. He’s all about helping employees improve and become the best versions of themselves they can be.”

Partin had only been at Sharonview FCU a few months himself when he hired Otey as COO in 2014. Otey came to the organization after spending nearly 25 years working for several large commercial banks, including Wachovia National Bank of Virginia (since acquired by Wells Fargo), where he rose to SVP, and Capital One, where he served as EVP and Northeast USA market executive.

The experience Otey gained through these high-powered positions equipped him to make an immediate and significant impact at Sharonview. Within a few years, he was promoted to the additional role of executive vice president to reflect his growing responsibilities in assisting Partin with strategic leadership.

“Ricky has helped me create the culture that I wanted to create at Sharonview, where we place a premium on leadership,” says Partin. “Not only does he bring great ideas to the table, but he also challenges me on my ideas and how to make them better.”

Otey agrees that he and Partin have an effective partnership. “And it’s grown to become even stronger over the course of these 6 1/2 years,” he adds.

The duo have great discussions during their “Coffee With Bill” sessions, where they hash out ideas on a whiteboard. From these sessions emerged the idea to launch Operational Excellence, an organization-wide initiative that drives creative solutions for streamlining business operations and identifying new opportunities for growth. Otey was a natural to lead this program, which solicits input from all levels of employees at Sharonview. The improvements implemented through the Operational Excellence program include retooling the CU’s card services program to provide greater efficiencies and adding greater flexibility to its mortgage portfolio by writing loans to conform to Fannie Mae standards.

“You give your biggest opportunities to your best people, which is why I gave this initiative to Ricky,” says Partin. “Not only has Operational Excellence saved us hundreds of thousands of dollars, but it’s also brought staff members into the limelight to present their great ideas.”

Ricky Otey
Executive Vice President and Chief Operating Officer
Sharonview FCU
asset size — $1.7 billion
I try to hire and surround myself with the smartest, most talented people I can find, but that doesn’t mean I should overlook my own professional development.

An Era of Growth

Much of the growth has occurred because of a strong effort to raise consumer awareness of Sharonview in the communities it serves. “We’ve worked hard to turn ‘Sharon Who?’ into Sharonview,” says Otey. “Most people had never heard of Sharonview because the organization did not invest a lot in branding and marketing. Bill and I have undertaken a deliberate strategy to change that. We’ve invested in our brand, launching a new brand campaign with a new logo. We’ve also reinvested in our branch network, opening several new branches and relocating others.”

While Otey has had many noteworthy achievements during his tenure at Sharonview, one accomplishment stands out above all others—and that’s how well the organization has navigated through the challenges of the coronavirus pandemic. The outbreak of COVID-19 in the U.S. coincided with Sharonview’s move into a new 150,000-square-foot corporate headquarters in March.

“On March 10, we had 175 people working in this new building, and on March 11, I had to send all of those people home,” Otey reports. “We had to get every employee set up to work remotely. We closed our branches and had to make sure we could service the needs of our 95,000 members without our systems going down.”

Fortunately, Sharonview already had the digital infrastructure in place to meet the increased member demand for remote deposit capture and online/mobile banking. Otey expects digital transactions to remain strong even after the pandemic subsides. “We made some large investments in digital five or six years ago, and those investments are paying off now,” he says.

By mid-year, branches had reopened with cleaning, social-distancing and mask protocols in place. Most back-office employees continued working from home but have adjusted well to remote work and remain highly effective in their duties.

“These last 10 months were nothing like what we had planned for 2020, but we delivered on behalf of our members and employees,” Otey says. “We had financial goals and metrics to meet, and it’s nothing short of amazing that we were able to meet those goals.”

Otey’s leadership style fits in well with the culture at Sharonview FCU, which focuses on collaboration and teamwork. He’s a big fan of Patrick Lencioni, author of such well-known books as Death By Meeting, The Five Dysfunctions of a Team and The Ideal Team Player. He subscribes to Lencioni’s belief that effective leadership is about process and structure.

“If you are a disciplined leader, you can create processes that will hold you and your team accountable and produce repeatable results,” Otey says.

He also agrees with Lencioni’s belief that organizations should hire for culture and train for skills. He and Partin are on the same page in this regard, hiring people who are collaborative and work well as part of a team.

“We are looking for team players who are hungry, humble and smart—and by ‘smart,’ I mean people smart,” Otey explains. “If someone is intellectually smart but is unable to get along with others, that’s not a person you want on your team.”

A native of Virginia, Otey credits his mother, a pre-school teacher, and his father, a Baptist minister, for instilling in him a strong appreciation of education. He obtained his bachelor’s degree, with a concentration in finance, from Longwood University in Farmville, Virginia, before embarking on his banking career in 1989. However, it was not until nearly 30 years later—while working at Sharonview—that he fulfilled his longtime goal of earning his MBA, which he obtained from Wake Forest University in Winston-Salem, North Carolina. He considers earning his MBA his second greatest achievement—right after marrying his high school sweetheart, Adriene, with whom he recently celebrated his 25th wedding anniversary.

Otey was chosen by his fellow students at Wake Forest as student leader and had the honor of delivering the commencement address during his MBA graduation ceremony. He took that opportunity to answer a question that many students had posed to him: Why did he feel the need to pursue a master’s degree when he had already achieved what for many is the ultimate goal of a C-suite position?

“My answer to that question is, ‘Leadership is a journey that you never complete,’” he reports. “I try to hire and surround myself with the smartest, most talented people I can find, but that doesn’t mean I should overlook my own professional development. To be an effective leader, I know that I have to be constantly improving my game.”  cues icon