Good Governance: Is Virtual Board Work Here to Stay? 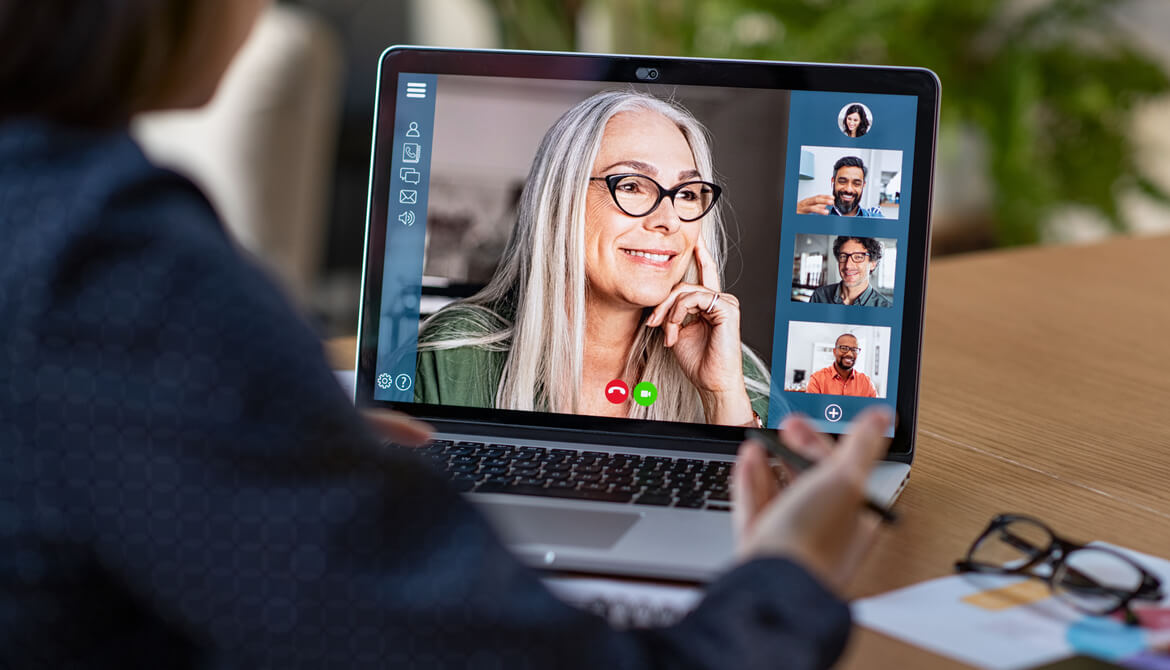 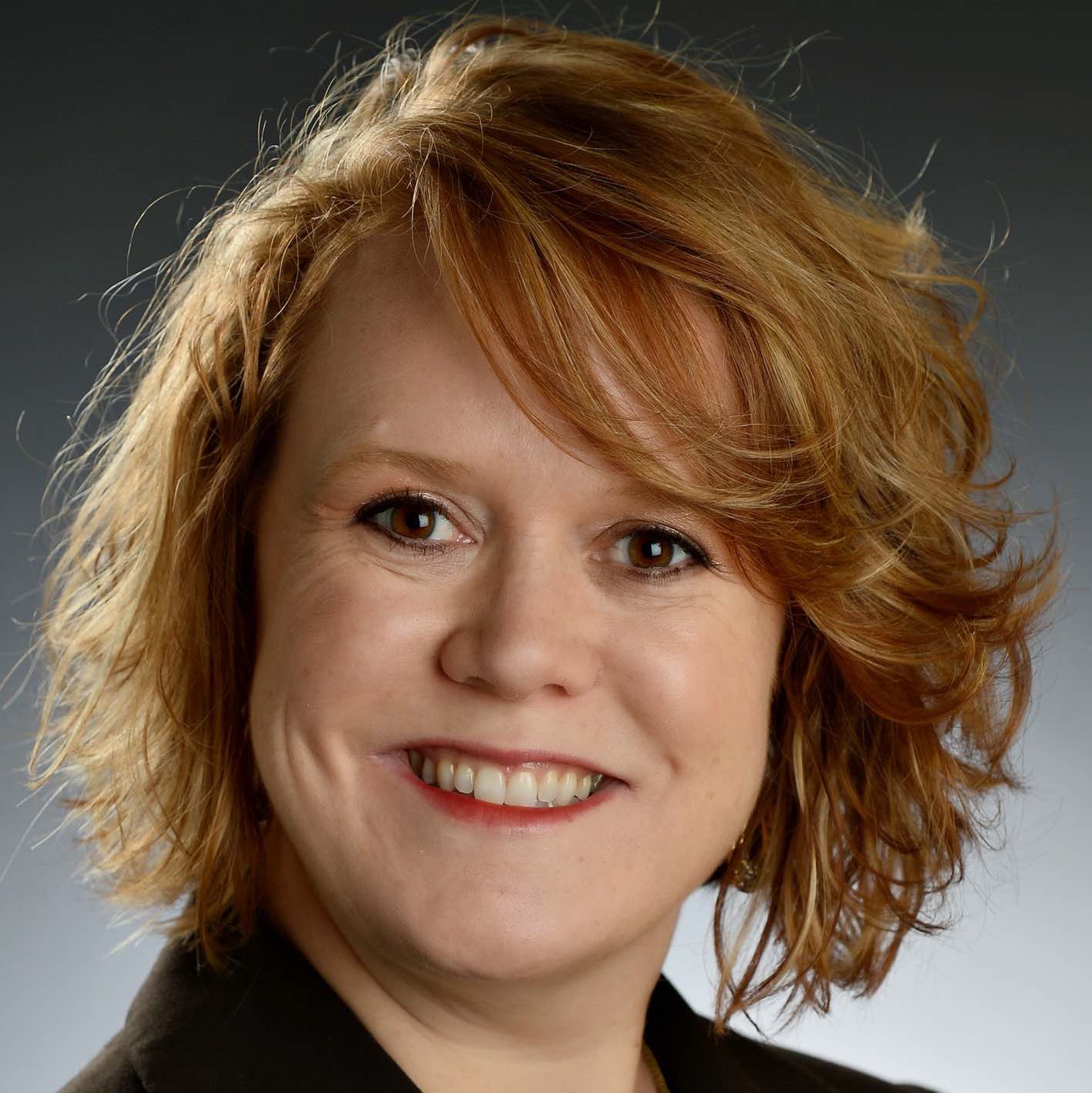 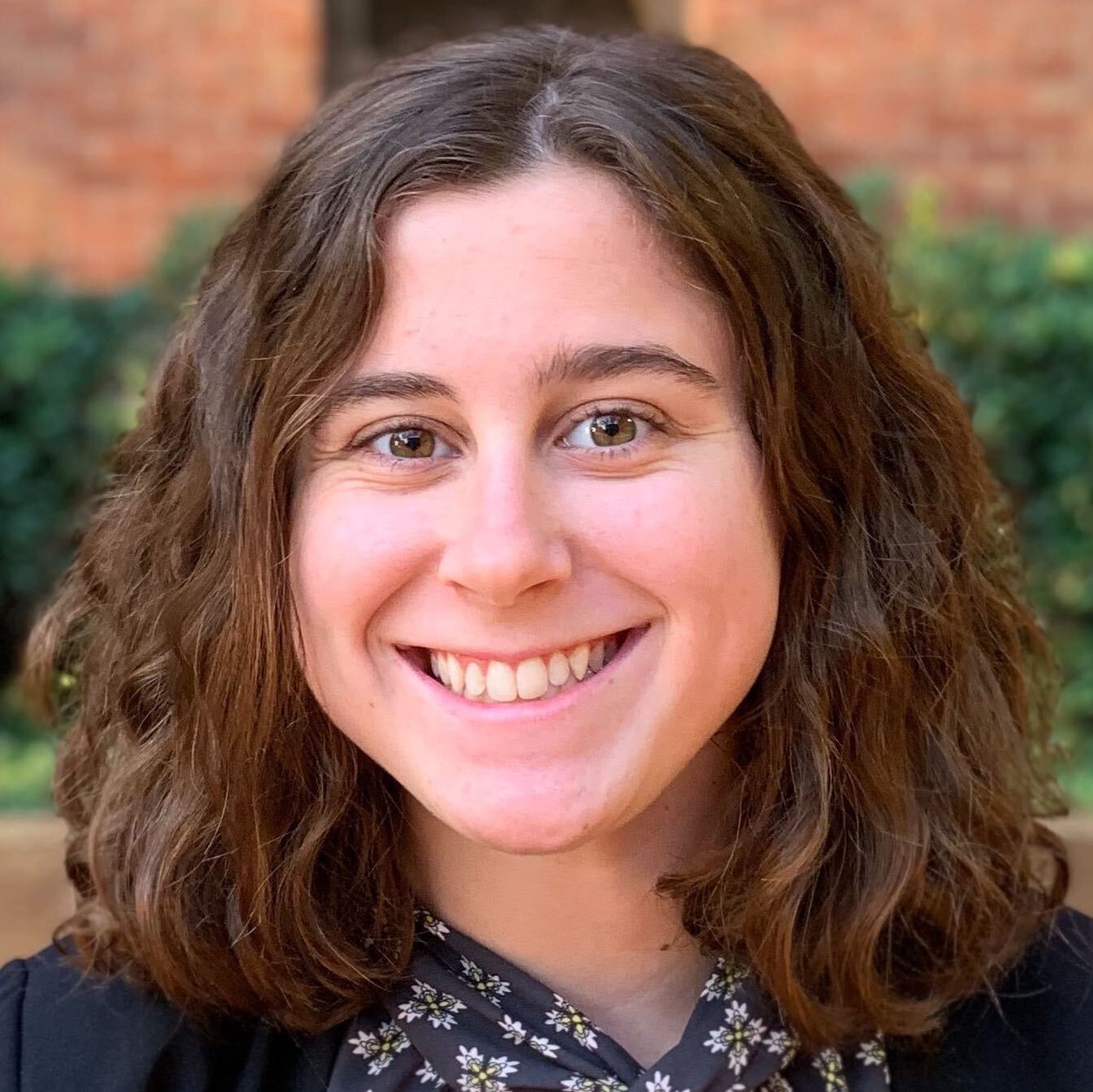 A return to ‘normal’ is less likely than a shift to a ‘new normal’ involving a hybrid approach.

By mid-March 2020, most businesses had moved as much of their operations as possible to be remote—and board meetings were no exception. Whether board members were prepared or not, they had to adjust to meeting remotely and conducting all their work online. For many, this meant using mobile devices and digital tools daily that they had once used only infrequently as contingencies. As we pass the one-year mark of the global pandemic, it’s becoming clear to many boards that a “return to normal” in the coming months is less likely than a shift to a “new normal”—one that involves a hybrid approach of remote and in-person governance.

Diligent Institute interviewed corporate directors from around the world to better understand the evolution to virtual governance and determine what the future might hold. In our research, we sought answers to such questions as:

How Smooth Was the Transition to Virtual Governance?

When the COVID-19 lockdowns began in March 2020, companies sent employees—including those in leadership—to work from home. At first, most believed the lockdown would last, at most, a couple of weeks. So initially, many companies simply postponed full board meetings, annual membership meetings and other larger-scale governance activities. As time progressed and it became clearer that the pandemic would last for months instead of weeks, the urgency and frequency of board meetings both increased. Directors learned they not only had to manage virtual board activity, they had to master it.

But making the shift to virtual governance involved more than just setting up a webcam, and directors shared in our interviews that the initial transition was a bit rocky. Because of the urgency and severity of the pandemic, directors found themselves tackling thorny issues they’d had never had to deal with previously—shoring up crisis plans for a crisis without a clear end date, ensuring employee health and safety, implementing COVID-19 testing and face mask policies, and deepening the bench for emergency succession plans. Board conversations at times could be intense—all while participants stared into each other’s faces arrayed in rows of boxes on their monitors.

Meanwhile, well-rehearsed board norms—such as not talking over one another in meetings—had to be relearned, even by seasoned directors who knew their colleagues on the board quite well. In our conversations, directors said the virtual format made it more challenging to ensure everyone’s voices and perspectives were being included. Some expressed concerns about the possibility that body language, other nonverbal cues and sidebar conversations were all but eliminated over webcams. Additionally, questions arose over such issues as whether or not to enforce the use of headphones to ensure those in directors’ households wouldn’t have to be included in the minutes as “attendees” to the board meeting, just because they happened to be within earshot of the proceedings.

How Have Directors Adapted to Virtual Governance Over Time?

Initial logistical obstacles aside, directors told us they overcame the challenges of virtual governance with practice. For example, meeting times were shifted to ensure as many directors as possible could attend. Directors began experimenting with other digital tools to augment the web-conferencing experience—including using secure messaging apps that facilitate confidential communications for directors and senior managers, while still allowing the legal department to enforced appropriate rules for record retention.

By fall, directors had learned how to utilize features like virtual meeting breakout rooms to facilitate smaller, more focused conversations and to better facilitate some much-needed personal interaction. They created more formalized protocols to indicate to their fellow members that they wanted to speak, and learned to pause for longer amounts of time between talking points to give everyone the chance to chime in. In time, virtual meetings achieved the regular, functional rhythm once enjoyed in pre-pandemic meetings.

Anna Catalano
Director
Willis Towers Watson, Kraton Corporation, HollyFrontier Corporation, Frontdoor Inc. and Appvion
“Directors have had to go through a learning process with technology and various platforms, but it has taught us about how to have productive conversations when we can’t be with one another in person. We’ve learned how to let everyone speak without interruptions and how to signal that we want to say something. For the boards with international members, we have adjusted our schedules because of time zone differences.”

What Are Some of the Pros and Cons of Virtual Governance?

Despite the uncertain and forced nature of the abrupt shift to virtual governance, directors discovered some unforeseen advantages to virtual meetings. The virtual format allowed their meetings to be more flexible in that they did not have to all travel to the same place. Before, the board meeting schedule might have been determined as far as a year in advance; after moving virtual, directors were able to gather with much less lead time. The agility virtual meetings provided proved to be incredibly beneficial as the pandemic and the impact on businesses evolved rapidly, and strategies had to be adapted quickly—and in some cases, frequently—to keep pace.

Directors reported being pleasantly surprised to find that virtual meetings were more concise, focused and dynamic. Before the pandemic hit, board meetings might take place over multiple days with directors sitting in boardrooms for hours at a time, with much of that time spent passively listening to verbal reports from management. Directors found virtual meetings tended to include less presentation of information and more dynamic discussion. Reports were routinely sent in advance—usually through an encrypted board software platform rather than on paper—so the meeting time could be devoted to discussion of the issues. Directors often expressed satisfaction with this new method of meeting—and expressed their hope that the days of lengthy, verbal reports and heavy paper packets might finally be over.

Despite such advantages, virtual meetings cannot fully take the place of all in-person governance activities. Directors reported that they felt the loss of in-person contact most when they tried to hold virtual deep-dive strategy sessions or conduct in-depth risk assessments. Directors overwhelmingly feel that in-person meetings are necessary for meaningful, breakthrough discussion.

Additionally, concerns about boardroom culture remain. Directors feel that there is much lost in the way of personal connection and bonding, changing the level of energy in the boardroom when everyone is meeting over web conferencing. Gaps in this area will likely ensure the return of at least some in-person meetings once the COVID-19 vaccine is widely distributed and the pandemic subsides.

How Did Boards Onboard New Directors or C-Suite Executives Virtually?

Virtually onboarding new board and executive team members during the pandemic added to directors’ worries about maintaining a healthy boardroom culture. We talked with several directors who onboarded during the pandemic, and they noted feeling somewhat disconnected from other board members. Though their onboarding process was thorough, they remarked it was difficult for them to forge personal connections and establish camaraderie with their new peers.

Yet, as gathering safely in person remained out of reach, directors came up with creative solutions to help overcome these challenges. Several directors mentioned mentoring programs as an invaluable tool for a successful virtual onboarding. Ensuring each incoming director or executive was paired with a seasoned director allowed the newbies to share their perspectives and get tips on boardroom “norms” and specific meeting procedures, and gain a better understanding of overall company culture.

Phyllis Campbell
Director
JPMorgan Chase & Co. (Pacific Northwest), SanMar, US-Japan Council and Allen Institute
“On video teleconferencing, it’s hard to see body language cues. These buddy systems are especially important when you’re bringing on more diverse directors who might not have ever been on a board before. Making sure they have the tools and the insight necessary to be effective early on is hugely important. Usually they bring different perspectives, so they need to know how to do that and be heard.”

On the whole, directors felt that virtual onboarding had to be more formal, deliberate and thorough to ensure new board members and executives gained an accurate idea of the company, a solid understanding of their peers, and were able to fulfil their roles to the best of their abilities. Coming out of this experience, many boards have strengthened their onboarding programs for the future—regardless of whether the onboarding is conducted in-person or virtually.

What Will Virtual Governance Look Like in 2021 and Beyond?

According to Diligent Institute and Corporate Board Members’ December 2020 Director Confidence Index, 40% of U.S. public company directors surveyed anticipate at least a quarter, and as much as half, of their board activity will remain online post-vaccine distribution in 2021. 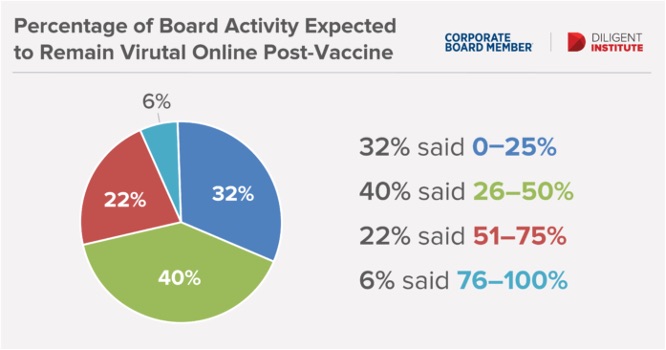 This finding is emblematic of a wider shift in how we think about virtual board activity. Whereas in the past, virtual attendance at a board meeting or annual general meeting was considered suboptimal and might even be counted against a director, this stigma has entirely dissipated during the pandemic. Directors have proven that they can and will have efficient and meaningful virtual meetings.

Doris Honold
Director
Credit Suisse International
“Before the pandemic, if you dialed in virtually instead of attending an in-person meeting, it was frowned upon. Now however, this stigma is disappearing, and will likely continue to disappear after the pandemic ends. I think board members are beginning to realize that a healthy mix of in-person and virtual attendees will not affect the effectiveness of the board. I also think that this in-person and virtual mix will make for more international and diverse boards.”

Expect to see hybrid model board meetings moving forward. Directors understand the benefits of virtual governance and have worked to adapt to and overcome the sudden, unexpected transition away from in-person meetings while the pandemic rages on. While some in-person meetings will surely still be necessary, virtual meetings are likely to be the default for most routine business meetings, with in-person gatherings being reserved for intentional, strategic discussions.

Here are questions to ask yourself about this:

Dottie Schindlinger is executive director and Kira Ciccarelli is lead researcher of Diligent Institute, the global corporate governance research arm and think tank of Diligent Corporation. Diligent is a modern governance company, providing a suite of solutions to help organizations streamline, secure and enhance the work of their boards and senior leadership teams, serving more than 19,000 organizations in over 90 countries. Diligent is also the parent company of BoardEffect, a leading governance software platform for nonprofit organizations and credit unions.