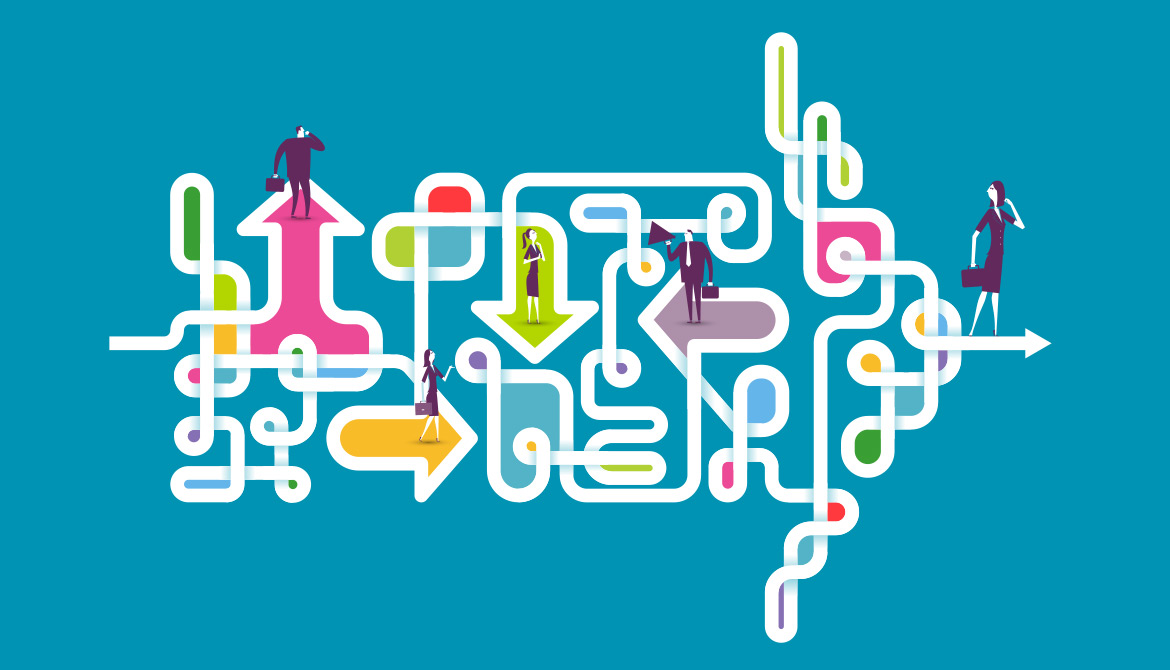 A career path that takes you from there to here isn’t always a straight shot, and although there’s a lot of value in getting from point A to B directly, some execs have found success in taking roads less traveled.

We all know people who know exactly what they want in their career right from the get-go. While they might toward the end of their working careers wonder if they missed out on other, more fulfilling options along the way, they never falter. They drive straight to their destination without ever getting sidetracked.

But there’s more than one way to travel down a career path.

Sometimes people begin the trip without a map or even a clue as to where they’re going, resulting in an interesting and exciting, if circuitous, journey. Such has been the experience of those appearing in this article to share their stories about their unusual career paths. As you will see, although each person’s journey has been different, all of these CU professionals have some commonalities—staying flexible, acting on opportunities when they presented themselves, working hard, networking and building relationships. They also invested in themselves, furthering their skills, education and taking on challenges that would force them outside of their comfort zones.

At 35 and recently installed in the newly created position of VP/data analytics at $1.4 billion Whatcom Educational Credit Union in Bellingham, Wash., CUES member Brandon Hahnel seems to have a firm grip on his career. However, when he graduated from college, he wasn’t exactly sure where his passion for statistics and economics was going to take him. The way before him was very unclear.

Hahnel has taken a very diverse route to his current role. After his initial hire in 2004 as a flex teller, his titles included (and sometimes came in quick succession) loan officer, marketing lead, marketing analyst, financial analyst, finance manager and VP/finance. Some of these moves were lateral ones, he says.

“My career really began when I moved into the marketing analyst position,” Hahnel recalls. “I’ve always had a drive for information and analytics, but this position really allowed me to sink my teeth into our organization’s data for the first time. From then on, I knew that whatever I did, I wanted it to be related to analytics.”

His trajectory hasn’t been error-free, particularly at the start. Hahnel says his “rookie mistakes” included things like putting the wrong dates on board reports and a system oversight issue that required sending out error letters to more than 700 members.

“The biggest course correction for me was learning to slow down,” he says. “It’s in my nature to move fast and hop from big picture to big picture. I’ve learned to double-check everything and to rely on my team members for audit support.”

Still, there were times when alacrity was required, such as when he was given just 48 hours to decide if he wanted to transition from marketing to finance. He leapt at the unexpected opportunity, despite some sense of risk. The fact is, he says, one can never really know if the timing is right or if you’re moving into a position that might be a smidge beyond your present capabilities. “All you can do is make an informed decision and jump in,” he says.

Looking back, Hahnel says he might have “accelerated” the pace of his career trajectory by switching organizations, but he’s glad he stayed put, happy with his progress and contribution to the credit union.

“I’ve enjoyed every single position I’ve held at WECU—from the opening drive-up shift at our main branch to coordinating 500-plus attendance at our annual meetings in my marketing days,” he says. “If I ever catch myself not enjoying my job, I pounce on any opportunity I see to reshape those processes that are killing my vibe. I want to be excited about what I do.”

Career path takeaway: Speak up. “After I moved into the financial analyst role, I became much more deliberate about voicing and documenting my hopes for the future,” Hahnel says.

“This crazy trip began with a sweaty car ride, a little innovation and getting out of my comfort zone,” says Josh Rodriguez president/CEO of $36 million Missouri Valley Federal Credit Union, Saint Peters, Mo. “Six years and a whole lot of progress and successes later, I think it was worth feeling a little uncomfortable.”

What about that car ride? It’s a bit of a convoluted story. Rodriguez—who became president/CEO in 2012, just two months shy of his 33rd birthday—started working in credit unions back in the early 2000s as a call center employee.

“I remember mentioning to my wife, mostly jokingly, that I could be the CEO of a CU,” the CUES member recalls. “I didn’t have a plan at the time and really didn’t plan on pursuing the career path; I was mostly joking and being a little arrogant.”

His tenure with Missouri Valley CU began in 2004 as the automated services coordinator in the accounting department. He later returned to school, obtained an IT degree and in 2009 left the CU to pursue a full-time IT career. Even so, he stayed on with Missouri Valley FCU as a part-time employee, working one night a week maintaining the IT systems. In 2011, he returned full time as VP/operations; three months later, the CEO resigned and Rodriguez lobbied for the job.

But there’s an in-between to this tale. Because of an economic downturn, Rodriguez was laid off from that aforementioned full-time IT job. He then landed an accounting position with a construction company.

“I like to call that my trial by fire; I was in way over my head,” he says. “But I learned a ton about construction, accounting, dealing with auditors, financial reporting and so on. Then, after 18 months with that company, a position opened up at Missouri Valley FCU.”

This was the VP/operations slot, which brings us back to that fateful car ride. When Rodriguez heard about the open position, he did something completely out of character—he called the CEO and told him he was interested in the job. The CEO agreed to an off-site meeting at his house. The problem for Rodriguez was that his air conditioner was out in his car, it was in the middle of a broiling St. Louis summer, and he was working and living miles away from the CEO’s house.

“This would mean arriving sweaty,” he recalls. “Fortunately there was a Walmart less than two miles from where he lived, so I hit the store, bought a polo shirt, a package of undershirts, a towel and some other toiletries to clean up in the Walmart bathroom before talking with him. When I arrived, you would have thought I had just stepped out of the shower, not driven 45 sweaty miles to his house.”

The effort, along with his pitch, paid off. Two days later, Rodriguez had the job. Three months later, he became CEO of an organization that was far from thriving. In fact, during the 10 years prior, Missouri Valley FCU had burned through seven CEOs and endured seven straight years of negative income.

“By stepping into the CEO role, I was taking the helm of a ship that many more before me, more experienced and better educated than I, had been unable to right,” he says. “Missouri Valley FCU was sinking fast and needed some stability in the corner office.”

He has apparently brought that. Since Rodriguez became CEO, assets have grown by 23 percent, loans by 34 percent, deposits by 25 percent, and membership by 7 percent.

Career path takeaway:  Leap on it. “Sometimes you see an opportunity and you have to act fast,” he says.

Her career path was one that took her from Canada to the States, says CUES member Teresa Y. Freeborn, president/CEO of $1 billion Xceed Financial Credit Union, headquartered in El Segundo, Calif. Starting out as a credit union teller, Freeborn has held almost every possible position during the last 40 years, working her way up mainly through the marketing side of the business. She arrived to her current role, and to Xceed Financial CU, in 2006.

Prior to joining Xceed Financial CU, Freeborn served as SVP/marketing and communications at Kinecta Federal Credit Union. She was also president of Kinecta Financial and Insurance Services (both in Manhattan Beach, Calif.). And before any of this, Freeborn was an executive with Central One Credit Union in her native Vancouver, British Columbia.

These are pretty impressive credentials, especially considering that when she began her career, female executives/role models were few and far between.

"And not just in our industry but in the workplace generally,” she recalls. “So, I wouldn’t say that I set out to become CEO. But I was ambitious and hard-working and I took full advantage of the opportunities that presented themselves, such as volunteering for projects others didn’t want to do or involving myself in areas I knew little about. The more I did and achieved, the more recognition and opportunities came my way."

One of the best decisions Freeborn says she made was back in 1998 when she agreed to attend a CU conference in Australia. There, she presented results from a research-based public awareness campaign she had developed and implemented in Canada. The attention she garnered from that presentation led to her being offered the position with Kinecta FCU—although at the time, this credit union was called Hughes Aircraft Federal Credit Union. The name change and rebranding effort Freeborn led for the organization resulted in her securing the CEO position with Xceed Financial CU.

Another good move was realizing early in her career that her background in marketing and communications put her at a disadvantage compared to those on the lending and financial sides of the business—“the disciplines that seem to grow the most CEOs,” she says. Freeborn shored up her credentials by earning an MBA and taking on assignments that would bolster her "ability to go toe-to-toe with the bean counters."

"But a decision that wasn’t so great was not advancing myself earlier in my career towards opportunities that now, in retrospect, I could have been successful at,” she recalls. “I was focusing on having all my ducks in a row—work experience and skills—rather than being bold and jumping in, like my male colleagues were doing. Knowing what I know now, I would have propelled myself forward a lot sooner and probably accomplished more in my career as a result."

Career path takeaway: Become visible. “I have an instinct for relationship-building, which led me to become involved in professional organizations and industry-wide initiatives. In those situations, one’s profile is raised among movers and shakers who are making things happen in the industry and in their credit unions, and I worked hard to make the most of those opportunities.”