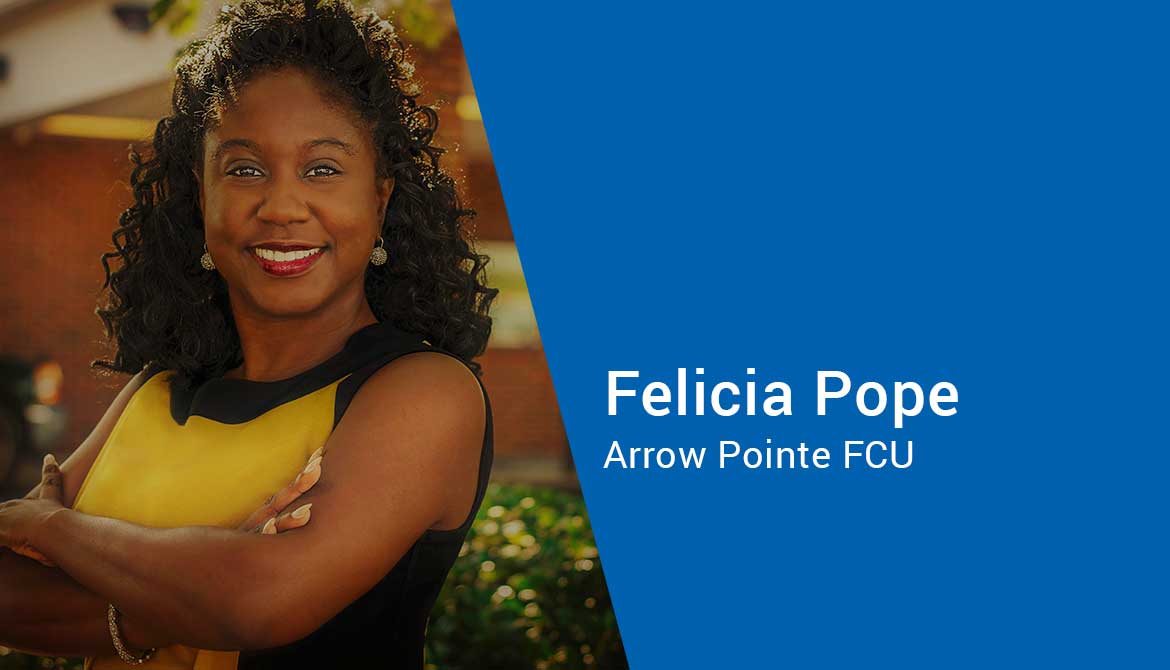 Passionate about marketing, helping people and giving back, the credit union industry has provided Felicia Pope, CSME, the perfect arena for taking action and risks—although she never saw it coming.

CUES member Felicia Pope, CSME, scoffed when her college professor predicted she would end up in finance. After all, he taught marketing—where Pope’s real passion was and is. Now VP/marketing and business development for ArrowPointe Federal Credit Union, Pope says at the time she had zero interest in anything financial.

“I was adamant I wasn’t going into finance,” recalls Pope, adding she still has no idea why he made that prophesy. “But that’s because when he said that, I only knew what I had heard about banks. I didn’t really understand the credit union difference.”

Turns out, Pope should have listened, although she did take a roundabout route before landing at ArrowPointe FCU. Her career path started 20 years ago working for a global retail skylight manufacturer and distributor, first serving as a receptionist before moving to accounts receivable and then into marketing. Her next job was with a commercial construction company, handling that organization’s marketing. After that came a stint as a marketing manager for a residential builder, a position that involved marketing the homes and also the financing/mortgages offered by the company.

During Pope’s tenure there, she was also working part-time for a jewelry retailer. One of her co-workers was also a credit union branch manager and talked about how great financial cooperatives are. This roused her interest, so when a marketing opportunity at ArrowPointe FCU came up, she applied.

Headquartered in Catawba, South Carolina, ArrowPointe FCU is a community-chartered credit union with $160 million in assets and seven branches. Its 58 full-time and five part-time employees serve around 19,000 members.

“For a mid-sized credit union, we’ve experienced significant growth,” says Pope. “This has happened organically, since becoming community chartered, and also through acquisitions. We merged with Republic Federal [Credit Union] about 12 years ago. Five years ago we acquired 1st Patriots Federal Credit Union. That added $33 million in assets.”

Pope joined the credit union in 2007—right at the economic downturn—as director of marketing and business development. She stepped into her current position in 2013, tasked with the strategic direction of the ArrowPointe FCU’s brand as well as with those marketing functions designed to bring in new members, increase revenue and improve member experience. Throughout her career, no matter what the industry, she’s maintained a consistent passion for marketing.

“Two things have always remained the same—strategic marketing and my need to connect with people. So in 2007, when people needed a helping hand more than anything else, the credit union philosophy of ‘people helping people’ just seemed like the next logical step for me,” says Pope. 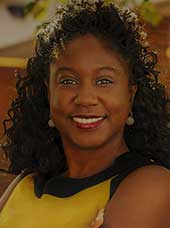 Felicia Pope, CSME
VP/Marketing
ArrowPointe FCU
The best decisions I’ve made were taking chances even with unfavorable odds. I’m normally a very conservative person, but I’ve found when I can muster the courage to take a risk, I’ve not had any regrets. I tell myself I’ll either win from it or I’ll learn from it. Eventually, I’ll meet success either way.

Aligned with this mindset, Pope gives presentations  to anywhere from dozens up to a thousand people about credit unions, financial management and more. Although she gets nervous before stepping on stage, Pope sees these speeches as a way of helping the audience and giving back to the community.

Moving forward despite her fears has made a positive difference to her career trajectory, says Pope.

“The best decisions I’ve made were taking chances even with unfavorable odds,” she explains. “I’m normally a very conservative person, but I’ve found when I can muster the courage to take a risk, I’ve not had any regrets. I tell myself I’ll either win from it or I’ll learn from it. Eventually, I’ll meet success either way.”

Pope credits an array of mentors—former employers and managers, college professors—with helping to propel her way forward. Coaches and authors—such as Melissa Nixon, “chief courage officer” of the Courageous Life Academy, a leadership and personal development consulting firm—have also played an essential role. (In addition to providing executive leadership coaching and training, Nixon is also author of The Courageous Life: How to Leap from Your Career to Your Calling.)

“[From Nixon] I’ve learned that being courageous doesn’t mean the absence of fear. It means we find the faith and strength to do it anyway,” Pope says. “So I’d encourage others to be agile enough to go with the flow, confident enough to trust your intuition, and courageous enough to live your life in a way that leaves no regrets.”

“CUES exposed me to a more in-depth analysis of strategy, marketing and executive leadership as it applies to strengthening the credit union industry,” Pope says. “Attending this program was one of the best decisions I made in the industry and that’s the hands-down truth.”cues icon

Pamela Mills-Senn is a writer based in Long Beach, Calif.