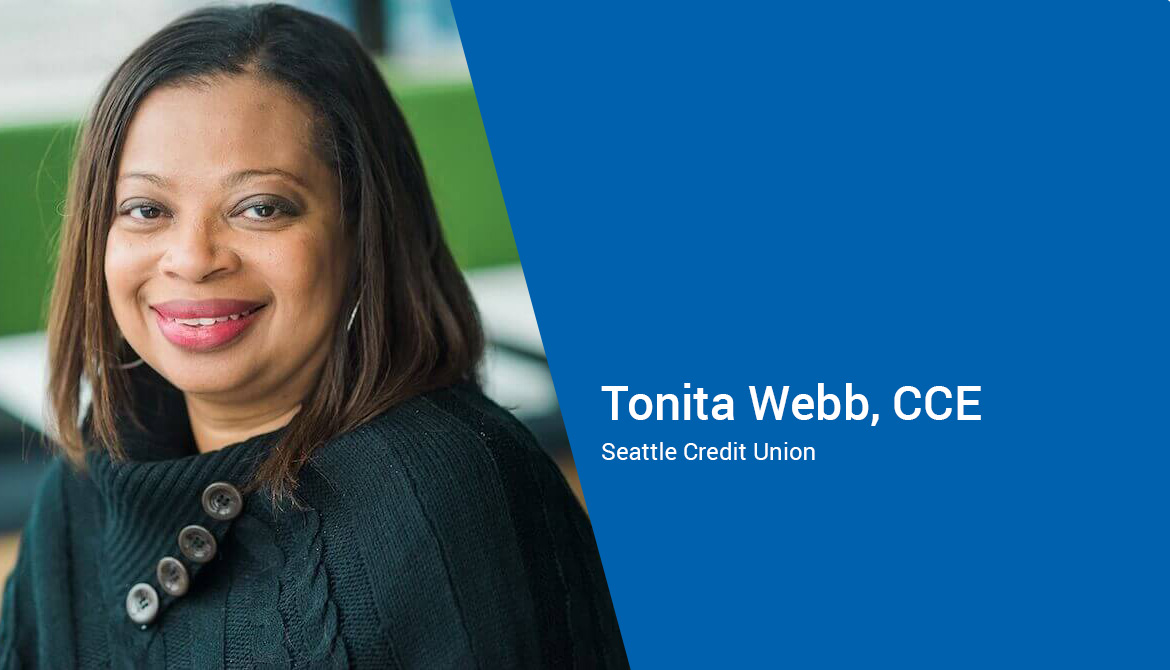 Whenever Tonita Webb, CCE, is presented with an unknown opportunity, she says “yes,” an approach that led her to Seattle Credit Union, positioning her to help make a difference both inside and outside the organization.

Before her hire 13 years ago by $867 million Seattle Credit Union, CUES member Tonita Webb, CCE, EVP/COO, had never really thought about credit unions. Webb, who spent four years in the U.S. Air Force, had worked in variety of arenas, such as the boiler industry and for the Department of Health in Key West. Her one stint in the financial sector was when she worked as a bank proof operator, reviewing transactions to ensure there weren’t any errors or discrepancies.

Her husband also served 10 years in the Air Force, which meant a fair amount of moving around the country and overseas. But upon landing in the Seattle area, Webb took time away from work to raise their four children. Once the youngest was old enough to be in school, and with 17 years of human resources experience under her belt, she began looking for HR positions.

Two opportunities arose: one with the Seattle SuperSonics basketball team, the other with Seattle CU. Although her friends and family encouraged her to consider the Sonics—“I’m a huge fan,” she says—she was more intrigued by the idea of working for the credit union.

“I decided to go with the unknown,” she says. “I love change and trying new things. As it turns out, my best career decision was choosing the credit union industry. It was more dynamic than I was led to believe, and it has allowed me to become involved in supporting and helping to change my community.”

“Over the last year, we became a LID [Low Income Designation] and CDFI [Community Development Financial Institution],” to serve low-income communities, says Webb. “I think these designations have been critical to the 15 percent loan growth we’ve experienced over the past year. The CEO and I discussed this move between ourselves and with the board because we felt the LID community was being underserved.”

Upon achieving these designations, the organization began a “big push” to those in the LID areas, revising its policies and looking at the way it did business in an effort to become more welcoming to the entire community, she says. Now, 52 percent of its membership is from the LID area, resulting in a more diverse and encompassing credit union.

It’s fair to describe Webb’s career at the credit union as a steady ascent. She was hired as HR manager, then became assistant VP/HR a little more than a year later. After a year in that position, she was promoted to VP/HR, occupying that role for two years before becoming the chief HR officer. She served in that capacity for several years before assuming the role of chief administrative officer in 2012. She’s been in her current position of EVP/COO since 2015.

“I want other women, especially women of color,
to see the possibilities—because in doing so,
we bring everyone to the table.”

Webb says her chief HR officer and chief administrative officer positions were integral to her career ascent, helping her gain a thorough understanding of the roles people played in the organization and their challenges and concerns.

Finding mentors who could prepare her for bigger roles was also key. An important one has been Robert Harvey, CEO of Seattle CU (then Seattle Metropolitan Credit Union) at the time she was hired. Harvey, who is also African American, introduced Webb to his network, helping her establish beneficial connections. Retired since 2011, he still mentors her today.

“I was so fortunate to see representation of ethnicity in the credit union, because you don’t always see that in this industry,” Webb says. “But he showed me what was possible to accomplish. And this is my platform: I want other women, especially women of color, to see the possibilities—because in doing so, we bring everyone to the table.”

“CUES has been invaluable,” she says. “Their programs fully equip you to expand your personal knowledge and also give you the tools to apply at your own credit union. They give you access to an Ivy League education that can be applied across any industry.”

Her advice for women just starting out in their careers is the same for those in the middle of theirs.

“Be confident in your own abilities,” she says. “Take responsibility for your mistakes. Don’t be afraid to fail because those failures are your greatest lessons. Be open to trying something new. Unfortunately, women are not often cheered on. Remember, there are always people around trying to discourage you for various reasons. You just have to ignore them.”